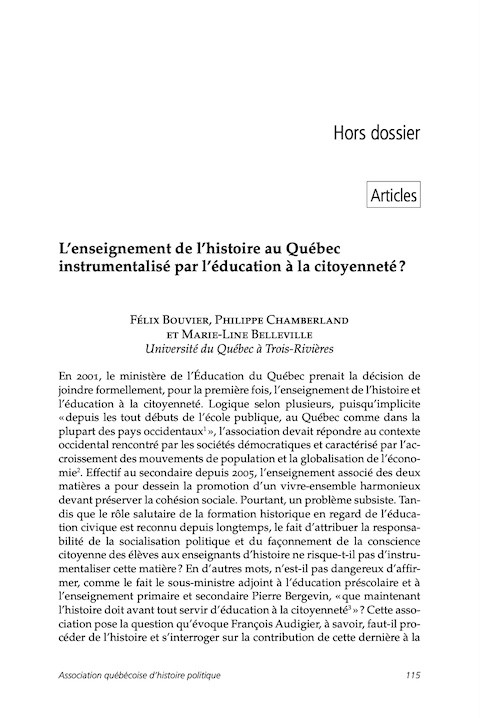 In 2001, the Quebec Ministry of Education made the decision to formally join, for the first time, the teaching of history and education to citizenship. Logical according to many, since implicit" since the very beginning. beginnings of public schools, in Quebec as in most Western countries”, the association had to respond to the Western context encountered by democratic societies and characterized by the increase in population movements and the globalization of the economy. In secondary school since 2005, the associated teaching of the two subjects aims to promote a harmonious living together to preserve social cohesion. However, a problem remains. history with regard to civic education has long been recognized, the attribution of responsibility for political socialization and the shaping of consciousness citizen of students to history teachers risk instrumentalizing this subject? In other words, is it not dangerous to assert, as the Assistant Deputy Minister for Preschool, Elementary and Secondary Education Pierre Bergevin does, “that now history must above all serve as education for citizenship”? This association poses the question that François Audigier evokes, namely, should we proceed from history and question the latter's contribution to citizen consciousness, or proceed from the aspects of citizen consciousness that one wishes to construct and then determine the historical objects which should be studied? The experience of comparable nations on a planetary scale makes us doubt the relevance of the association of the two disciplines. In fact, some Western democracies are worried about the quality of the civic education of their young people since the waves of industrialization and the great wars of the XIXth and XXth centuries which changed manners forever: intensification of migrations, upheavals social roles, loss of influence of religions, etc. Thus, although Great Britain has for some time taken the path taken by Quebec, France clearly dissociates the teaching of history from that of civic education. In order to understand all the ins and outs of the issue, we first provide a portrait of the context at the origin of the association of history and education for citizenship. Then, we will discuss the arguments in favor of combining the two subjects, especially in Great Britain, France and Australia. Finally, our gaze will focus on the case of Quebec and the type of privileged citizenship, in order to determine whether the teaching of history is not instrumentalised for the benefit of a citizenship education valuing the concealment of conflicts and divergences and if, to use the writings of Robert Martineau, the Ministry of Education has sacrificed the history class on the altar of citizenship education.