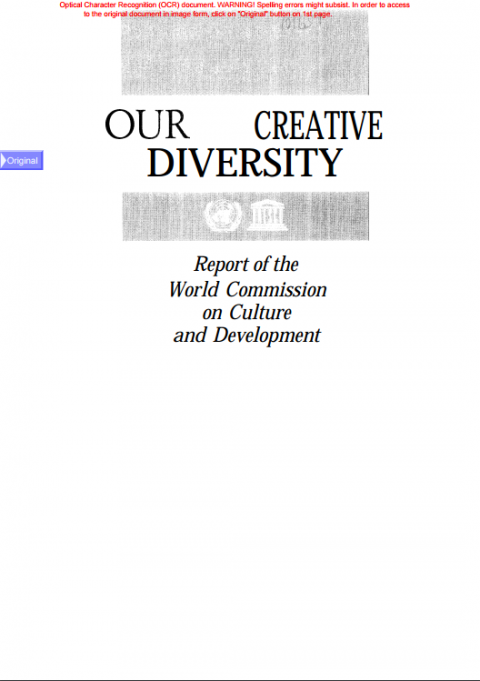 This report is designed to address a diversified audience across the world that ranges from community activists, field workers, artists and scholars to government officials and politicians. We want it to inform the world’s opinion leaders and to guide its policy-makers. We want it to capture the attention of the world’s intellectual and artistic communities, as well as the general public. We aim to have shown them how culture shapes all our thinking, imagining and behaviour. It is the transmission of behaviour as well as a dynamic source for change, creativity, freedom and the awakening of innovative opportunities. For groups and societies, culture is energy, inspiration and empowerment, as well as the knowledge and acknowledgment of diversity: if cultural diversity is ‘behind us, around us and before us”, as Claude L&i-Strauss put it, we must learn how to let it lead not to the clash of cultures, but to their fruitful coexistence and to intercultural harmony. Just as in the tasks of building peace and consolidating democratic values, an indivisible set of goals, so too economic and political rights cannot be realized separately from social and cultural rights. The challenge to humanity is to adopt new ways of thinking, new ways of acting, new ways of organizing itself in society, in short, new ways of living. The challenge is also to promote different paths of development, informed by a recognition of how cultural factors shape the way in which societies conceive their own futures and choose the means to attain these futures. I have for some time been concerned with the “culture of peace”. There is now considerable evidence that neglect of human development has been one of the principal causes of wars and internal armed conflicts, and that these, in turn, retard human development. With government complicity and with the intention of raising export receipts, private businesses continue to sell advanced military technology, nuclear materials and equipment for the production of bacteriological and chemical warfare. The concept of state sovereignty which still prevails today has increasingly come under scrutiny. In the area of peace-keeping, the distinction between external aggression and internal oppression is often unrealistic. The predominant threat to stability are violent conflicts within countries and not between them. There is an urgent need to strengthen international human rights law. Many of the most serious troubles come from within states – either because of ethnic strife or repressive measures by governments. Conditions that lead to tyranny and large-scale violations of human rights at home sooner or later are likely to spill over into a search for enemies abroad. The temptation of repressive states to export internal difficulties is great. Consider the Soviet Union’s invasion of Hungary and Czechoslovakia after it had used domestic oppression and the persistent refusal - for many years - of the previous South African governments to grant independence to Namibia. An ounce of prevention is better than a ton of punishment.