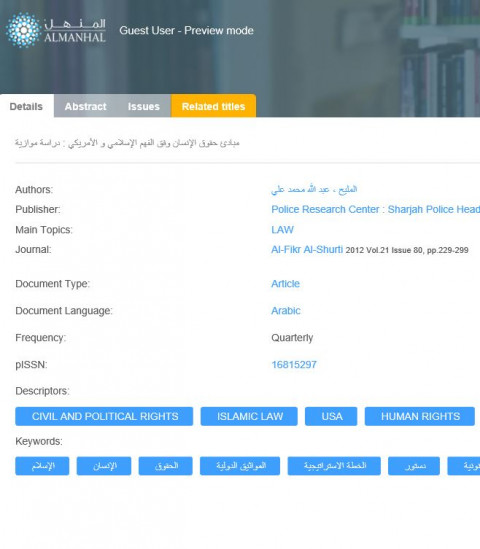 Human rights are an important topic in Islamic law, which was addressed by many researchers in their writings. Islam laid down controls with respect to the respect and preservation of human dignity and untouched.However, this research compiled the human rights in the balance of Sharia briefly and then compared it with the Bill of Rights of the US Constitution Issued in 1791 to demonstrate the greatness of Islamic law and preceded by all modern legislation in urging respect for and preservation of human dignity, and surrounded by guarantees to ensure that human rights, regardless of color or gender.

The Ministry of Interior of the United Arab Emirates has adopted these principles through the values ​​it adopted in launching the strategic plan 2011-2013 through the second value of justice and human rights, and the research concluded a set of results, including the recognition of Islam to the right to a fair trial, and protect it from all Dominating or arbitrary in the implementation of the proceedings against him, is not tortured and detract from his offer or ability, as stipulated in the US Constitution document section VI and VIII.