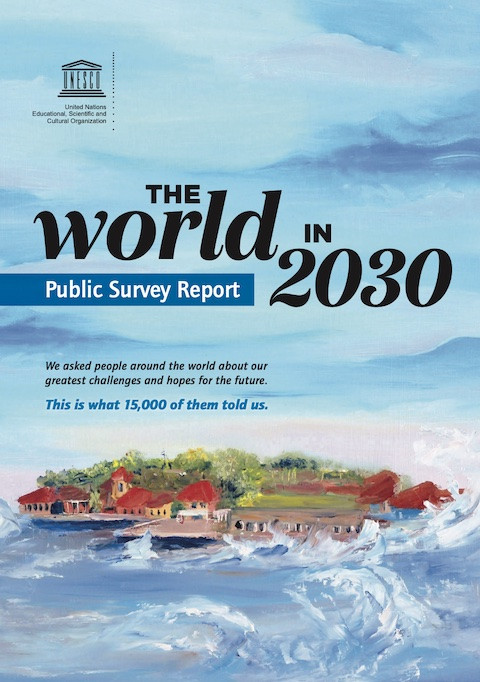 This report presents the results of the World in 2030 Survey, launched by UNESCO in May 2020 to provide a platform for people to share their views on our world’s most pressing challenges, including what specifically they are worried about, and, most importantly, what solutions they feel are mostneeded. The results of this survey present a clear and systematic framework for action, one that can enrich global reflection over the coming decade as part of a renewed push to achieve the Sustainable Development Goals of the UN 2030 Agenda.

Over 15,000 respondents from all regions of the world responded to the survey, providing a clear snapshot of global per- spectives. This survey received particular participation from women and young people. A majority of respondents had a university education, and the top region from which participants hailed was Latin America and the Caribbean.
Responses to the World in 2030 Survey indicate clear trends in the concerns felt by global citizens. According to survey respondents, the top challenge facing peaceful societies in the lead up to 2030 was, by far, climate change and loss of biodiversity, ranking in the top four challenges of 67% of respondents, and coming out on top for all regions and demographics. When examining this challenge, people were most concerned about increasing natural disasters and extreme weather, loss of biodiversity and its impact on people, pollution of the ocean and rising sea levels, and risk of conflict or violence. The top proposed solutions were investing in green energy and sustainable economies, teaching sustainability through education, effective international cooperation, and building trust in science and science-based decisions.

The next four most highlighted global challenges were violence and conflict (44%), discrimination and inequality (43%), lack of food, water and housing (42%), and health and disease (37%). There was some limited variation in the rankings of the relative importance of these four challenges across regions and demographics. For example, women and minority group respondents both ranked discrimination and inequality as the second most important global challenge, following climate change and biodiversity loss, rather than third, while respondents from indigenous communities and from Asia and the Pacific ranked health and disease as the second most important global challenge, rather than fifth.

The World in 2030 survey was an open online questionnaire held from May to September 2020. It was made available in more than 25 languages. This report also analyses results along regional, gender, age and other demographic lines, presenting a complex and valuable portrait of global sentiment on these key issues.