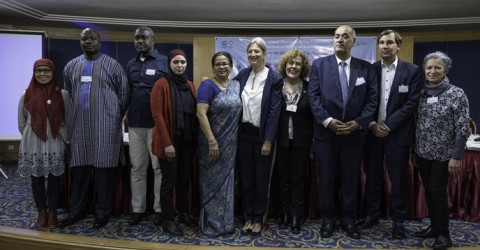 Civil society advocates from all regions called upon governments to give systematic priority to ensuring that the most vulnerable and marginalized groups have access to quality education and to respect financing benchmarks, during the 9th global meeting of the Collective Consultation of NGOs (CCNGO) for Education 2030 that gathered in Hammamet, Tunisia, on 3 and 4 December 2019.

“Clearly, we have an education crisis, fueled by lack of political will, low prioritization of education and inadequate financing as well as a rising trend in education commercialization, contributing to increasing inequality,” said the 100 plus participating organizations in their outcome statement. “To different degrees, education systems worldwide are not responding to the 2030 Agenda’s commitment to ‘leave no one behind.’”

Wrapping up eight panel sessions on all aspects of inclusion and equity, members recommended specific political attention to the following areas:

Members committed to build the capacity of civil society organizations to engage with other stakeholders and lead collective action to defend the right to education as a human right, public good and State responsibility. They expressed deep concern about the growth in education privatization and commercialization and affirmed that all private provision must be well regulated and aligned with human rights principles.

They stressed the need to strengthen partnerships with other social sectors, parliamentarians and the media to promote inclusion and equity. They also highlighted the importance of building the capacity of civil society actors to collect and analyze evidence-based data on the most marginalized groups.

Members acknowledged UNESCO’s leadership in coordinating the SDG4 agenda and the Education 2030 architecture and reaffirmed that the CCNGO is a key mechanism for increased information-sharing, capacity building and collaboration amongst CSOs in the pursuit of SDG4.

The meeting was opened by UNESCO’s Assistant Director-General for Education Stefania Giannini, Tunisia’s Minister of Education Hatem Ben Salem and the President of the Global Campaign for Education, Refat Sabbah.

During the Global Meeting, members elected their representatives to the Coordinating Group in the international and at large categories, while the regional focal points were agreed by consensus.

Members of the Coordinating Group appointed for two years are: