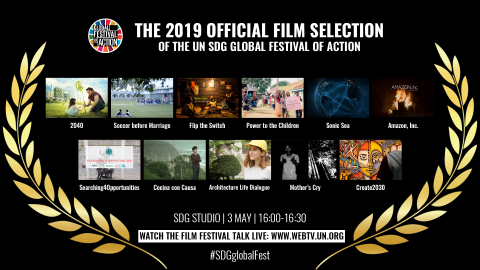 The Official Film Selection of this year's SDG Global Festival of Action has been revealed: 11 short films, documentaries, TV series and telenovelas that succeed at not only raising awareness on today’s complex issues and challenges but also showcasing opportunities that are emerging everywhere to take action and find local solutions.

A list of 11 films made it to the Official Selection of the SDG Global Festival of Action, including a wide variety of genders like short films, documentaries, TV series and Telenovelas. Besides the quality of the films and clarity of its messages, all selected pieces have one common line that made them stand out from the rest: their focus is not only about rising awareness on today’s complex issues and challenges but also to showcase opportunities that are emerging everywhere to take action and find local solutions.

The session hosted at the SDG Studio, is a space to congratulate the Directors whose films made it to the final list and where the “Official Selection laurels” will be announced. The session will be webcast via UNWebTV to reach out a broad audience outside the GFA venue in Bonn.