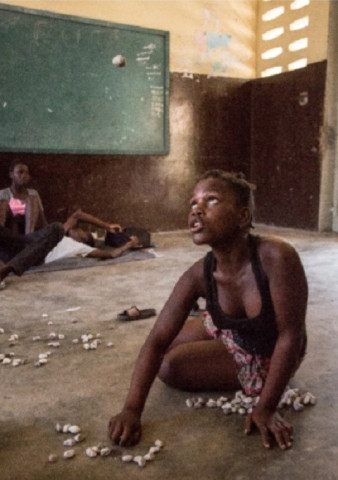 Latin America and the Caribbean is characterized by wide and persistent disparity by ethnicity. By most measures of well-being, including education, ethnic groups tend to fare worse than the rest of the population. The various forms of direct, indirect, and systemic discrimination have contributed to exacerbate inequalities and exclusion, especially in the context of the COVID-19 pandemic. As we commemorate the International Day for the Elimination of Racial Discrimination, which is celebrated on 21 March every year, we look at the exclusion of Afro-descendants and indigenous peoples in the region, and call for combating racism and ensuring educational opportunities for all.

They also suffer continued exclusion in education. The probability of Afro-descendants completing secondary education was 14% lower than that of non-Afro-descendants in Peru and 24% lower in Uruguay in 2015. A similar situation is experienced by indigenous peoples, who despite representing only 8.3% of the population in 2010, constituted 17% of the extremely poor in Latin America. In addition, their school attendance, educational attainment, and literacy rates are lower than those of the general population.

The 2020 GEM Report Latin America and the Caribbean-Inclusion and education: All means all, published in association with SUMMA and the Regional Bureau for Education in Latin America and the Caribbean OREALC/UNESCO Santiago reminds us that attendance was lower in 7 of 11 countries with data among 12- to 17-year-old Afro-descendants than for their non-Afro-descendant peers.

The region has made progress in recognising the rights of indigenous and Afro-descendant peoples in their legal frameworks, but there are still many challenges to overcome. Despite the fact that several countries in the region have approved educational inclusion policies that recognise different multicultural and intercultural processes, racial discrimination continues to be present inside and outside the classroom.

School segregation emerges as one of the major challenges for inclusion in Latin America and the Caribbean. Segregation by ethnicity is even more widespread in the region than segregation by socio-economic status.

Teacher bias is detrimental to student learning. In São Paulo, Brazil, grade 8 mathematics teachers were more likely to give white students a passing grade than their equally proficient and well-behaved black classmates

Another challenge relates to the fact that the composition of the teaching force does not reflect the diversity of the classroom. The representation of indigenous peoples and Afro-descendants in the teaching profession remains exceptionally low in several countries in the region. In Argentina, the participation of people of African descent in higher education institutions is remarkably low, with the exception of non-teaching staff in junior positions. In Costa Rica, a 2013 Decree promoted the training of teachers from indigenous communities through scholarships and other support measures for studies and professional development, but sufficient teacher diversity has not yet been achieved.

Community organisations play a key role in democratising education and promoting inclusion in education. One example highlighted in the Report is Ecuador, where people of African descent participate in the development of ethno-educational policies.

But despite these efforts, racial discrimination is still present in all spheres in society.

Tackling the causes of structural discrimination and inequality is essential to create educational opportunities for all. The International Day for the Elimination of Racial Discrimination is an opportunity to call on the countries of Latin America and the Caribbean to strengthen their commitment to the fight against racism and racial discrimination. This commitment is particularly important as we commemorate the twentieth anniversary of the Durban Declaration and Program of Action where States recognized that people of African descent, indigenous peoples, Asians, migrants and refugees are victims of past and contemporary forms of racism, racial discrimination, xenophobia and related intolerance, reaffirmed the value of cultural diversity and agreed on measures of prevention, education and protection aimed at the eradication of racism, racial discrimination, xenophobia and related intolerance at the national, regional and international levels.

Eliminating the barriers that limit the full inclusion of indigenous peoples and Afro-descendants in Latin America and the Caribbean must be one of the priorities for the near future, especially once the pandemic is over. The GEM Report for Latin America and the Caribbean calls for greater inclusion in education and urges countries in the region not to forget the most disadvantaged in the context of the COVID-19 crisis. The Report reminds us that the pandemic will have three types of immediate and long-term consequences for inclusion in education: consequences from loss of learning, from current and future recession and from interruption of support services. All of these will have a bigger impact on disadvantaged learners.

Before the pandemic, connectivity problems in rural areas disproportionately affected indigenous populations and people of African descent. In 2018, one in five indigenous Mexican children between the ages of 3 and 17 had no electricity, television or internet access at home. Even where internet connections are available, they are often not strong enough for data downloads or video calls. A report prepared by ECLAC on Afro-descendants and COVID-19 shows that the highest proportion of the population with Internet access at home in Colombia is among non-Afro-descendants (57%), a proportion that is about 1.5 times higher than that of their Afro-descendant peers (37%).

Governments across the region have made efforts to target interventions to disadvantaged learners during the pandemic. They have prioritized affordable internet access and universal access to computing devices, and have provided support to teachers, parents, and students. But even though Latin America and the Caribbean countries have been proactive in their attempts to achieve learning continuity and to target efforts to the learners most likely to be adversely affected by the pandemic, the impact of the pandemic on education will be lasting.