Inclusion in education in Central and Eastern Europe, the Caucasus and Central Asia
Fecha de publicación:
02/13/2021 - 22:08 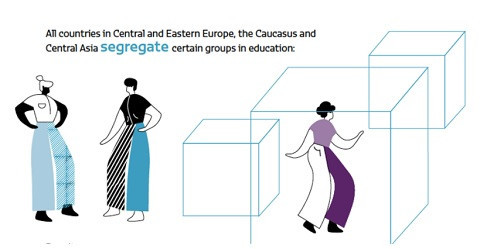 A new regional Report launched today in an event by the GEM Report, in partnership with the European Agency for Special Needs and Inclusive Education and the Network of Education Policy Centers covers inclusion and education – the theme of our 2020 GEM Report – in Central and Eastern Europe, the Caucasus, and Central Asia. Working from 30 new profiles of education systems from the region, the Report shows that, while access to education is high, the region has been trying to overcome a heavy legacy of segregated education, which is holding it back from achieving inclusion for all.

A shift towards a rights-based approach to inclusive education

In the past 20 years, education levels in the region, already among the world’s highest, have increased further, seeing out-of-school rates fall by half.

Adoption of the UN Convention on the Rights of Persons with Disabilities and the influence of international bodies, such as the Council of Europe and European Union, have led to important reforms.

In countries including Poland, schools are also making their support systems broader and more flexible, investing in resource centres that share expertise and materials with mainstream schools on the way to inclusion.  And there are signs of moves towards more inclusive and in-school support, with counselling and mentoring, learning assistance and specialist and therapist easier to come by.

Analysis of country profiles, which are also accessible from the country pages of the PEER website, shows that two in three education systems have adopted a definition of inclusion that embraces marginalized groups beyond learners with special education needs or disabilities. Tajikistan’s inclusive education strategy addresses disability, ethnicity, migration and gender, for instance. From Estonia to Slovenia and from Armenia to Ukraine, countries have been moving away from the outmoded medical model in pedagogical discourse and thus improving identification of special education needs.

But the shift to inclusion is far from complete. Many countries in the region have yet to shed one of the most poignant legacies of the second half of the 20th century: segregated education, once wrongly regarded as an efficient solution.

Many children with disabilities are still placed in special schools. Even those no longer enrolled in such schools may be placed in other non-inclusive arrangements, such as special classes or home schooling. We found that support measures, at heart, may still follow the targeted and exclusionary approach that traditionally dominated.

Even in countries with high levels of commitment to inclusion, such as Albania, implementation of laws and policies can lag due to capacity and resource gaps in school organization and teacher education. It can be due to resistance in the general population. In Uzbekistan, where the shift towards inclusive education is at a very early stage, a survey found that 70% of people believed children with disabilities should be in special schools.

Other forms of segregation and discrimination persist. Roma children face the greatest discrimination in the region, often also disproportionally diagnosed with intellectual disabilities. Children from poorer households may also find education opportunities harder to come by. While 11% of 15-year-old students from the bottom 25% in terms of socio-economic status scored in the top 25% in reading in OECD countries, the share was below 8% in Bulgaria and Hungary, among the lowest levels in the world and less than half those in Estonia and Kazakhstan.

COVID-19 has made the need for inclusive policies particularly urgent.  Despite strong government education responses to COVID-19, many learners were left unassisted, as in all corners of the world. Access to online education was a challenge for the estimated 1 in 4 secondary school students in the region without a laptop and 1 in 10 without access to the internet. Globally, teachers have insufficient digital skills for the challenge. A study of about 1,000 primary school teachers in Poland found that 52% had difficulty using digital tools.

The reality is that, as home environments and parental support have grown in significance during the remote learning period, those with a disadvantage are falling further behind. The need for stronger inclusive education policy is greater than ever.

Countries must deploy a range of policies boosting inclusion.

Inter-ministerial collaboration is well embedded in the region but needs strengthening regarding data exchange as in Lithuania, whose education, health and social ministries agreed to jointly develop measures to help children identified with autism or other developmental disabilities.

Countries should use models that allocate funds based on use of support services, instead of student categories, to ensure sustainability and avoid strategic behaviour; the Czech Republic is switching to funding per staff member.

Curricula and textbook development needs to adhere to inclusion principles as in Romania, whose curriculum has offered a comprehensive framing of Roma history since 2017.

Students and parents need to be involved more; only the Republic of Moldova reported engaging students in curriculum design.

Last but not least, teachers need more support to embrace diversity and be ready to teach all students. The ageing of the teaching force makes this need even more pressing.