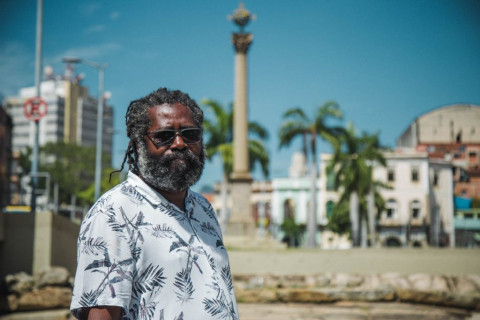 For 30 years, Brazilian activist Damião Braga, 53, has been fighting for the right of people of African descent to access land and property in Rio de Janeiro.

On the International Day of Remembrance of the Victims of Slavery and the Transatlantic Slave Trade, this year raising awareness to the dagers of racism and prejudice, his struggle is newly in focus.

A quilombola leader, he is frequently the target of threats and violence because of his activism. He demands from the State and the justice system the transfer of properties in a historical area of the city to the descendants of enslaved people.

During slavery (16th to 19th century), the term quilombola referred to the enslaved African people and Afro-descendants who fled the sugar cane mills and farms to form small villages called quilombos.

Today, the term refers to the descendants of these populations, who live in rural and urban communities, marked by cultural practices with strong links to ancestors. Quilombo territories and lands tenure regularization are guaranteed by the Brazilian Federal Constitution.

Braga leads Pedra do Sal, one of the main Brazilian urban quilombos, located in central Rio. Pedra do Sal was a secular residence of the enslaved Africans and their descendants.

The community wages a long-standing judicial and administrative battle to obtain ownership of the properties in the area, now owned by the State and claimed by the Catholic Church.

In 2005, the area was recognized as quilombola territory by the Brazilian government. Despite this, 15 years later, only two Afro-descendant families actually live on the site, since the land titling process has not been completed and most of the families have been evicted.

“Our right has already been recognized, Pedra do Sal is a quilombola territory. But now that right must be actually guaranteed”, said Braga, attributing this delay to the recent appreciation of real estate in central Rio before and after the Olympics, in 2016.

“For us, the titling of quilombola territories is a form of reparation, in the face of all that happened during the slavery period,” he said. “The territory was not titled precisely because of the structural racism that still persists”.

Braga and 25 families are now awaiting the conclusion of judicial and administrative proceedings to enforce their right.

For the community leader, his struggle for recognition is directly related to the fight against racism. “When we started to fight, to make this discussion about quilombola territory, the racism became even more evident, more visible.”

According to data from the National Institute of Colonization and Agrarian Reform (INCRA) of 2019, there are 1,700 ongoing processes for certification of quilombola communities in Brazil.

Braga is also a committee member of the Valongo Wharf Archaeological Site, listed as a World Heritage Site by the United Nations Educational, Scientific and Cultural Organization (UNESCO).

Valongo is in the former harbour area of Rio de Janeiro in which the old stone wharf was built for the landing of enslaved Africans reaching the South American continent from 1811 onwards. An estimated 900,000 Africans arrived in South America via Valongo.

“Valongo symbolizes the arrival of enslaved Africans in Brazil. The ‘Pretos Novos’ Cemetery symbolizes burial, those who are gone, and the Pedra do Sal quilombo symbolizes life, continuity, ”said Braga, citing historical sites in central Rio.

UN against racism in Brazil

On the occasion of the International Day in Memory of Victims of Slavery and the Transatlantic Slave Trade, the UN System in Brazil reminds all the work that is being done in the country to combat racism and discrimination.

During his first official visit to Brazil, held in February, the representative for South America of the United Nations Office for Human Rights (OHCHR), Jan Jarab, met with quilombola leaders to verify the situation of these communities.

The UN representative listened to the concerns of social leaders working in areas such as the rights of indigenous and quilombola peoples, rural movements and those affected by dams, focusing on the issue of violence in the countryside.

Reaffirming the commitment to implement the International Decade for People of African Descent (2014-2024), the UN System in Brazil also launched in 2017 the “Vidas Negras” (Black Lives) campaign.

The goal of the campaign is to draw attention and raise awareness of the impacts of racism, influencing strategic actors in the production and support of actions to combat discrimination and violence.