OSCE supports second forum on the role of women parliamentarians in the development of Uzbekistan
Post date:
2022/06/02 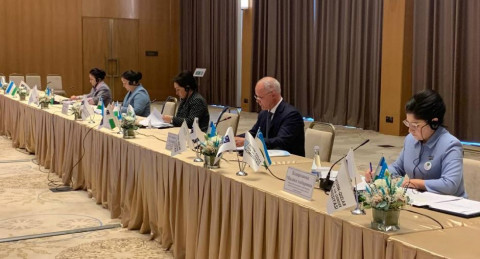 The Second Forum on the Role of Women Parliamentarians in the Development of the Republic of Uzbekistan in Tashkent, 13 April 2022.

More than 1,000 participants from the Senate and the Legislative Chamber of the Republic of Uzbekistan, deputies of local kengashes (councils) from all regions of Uzbekistan, members of the Youth Parliament of the Republic of Uzbekistan, officials of government agencies and public organizations and the media attended the forum in a blended format. Yulia Netesova, Chief of Democratic Governance and Gender Unit at the OSCE’s Office for Democratic Institutions and Human Rights (ODIHR), presented the ODIHR's work on gender equality and parliamentary representation.

Aim of the forum was to create a networking platform for effective co-operation between women’s parliaments and deputy groups at the national and regional levels on issues such as: expanding women’s participation in political and social life and achieving gender equality in community interaction; the roles of female senators and deputies in coordinating joint actions to achieve sustainable development goals and overseeing the activities of regional executive bodies of local kengashes; empowering women in parliament to implement policies and programmes related to climate change, environment, and disaster risk reduction.

The forum was opened by the Chairperson of the Senate of the Oliy Majlis of the Republic of Uzbekistan Tanzila Narbaeva. In her opening speech, she stressed that: “In recent years the country has been implementing large-scale reforms aimed at creating equal rights and opportunities for women and men, ensuring their full participation in managing the affairs of society and the state, their social economic and legal support”.

In his opening speech, Pierre von Arx, Head of the OSCE Project Co-ordinator in Uzbekistan stressed that “Achieving gender equality requires work in three interrelated areas: correcting the unfavorable socio-economic situation of women, fight against stereotypical perceptions and violence, and increasing participation of women in political, social and economic life.”

At the end of the forum, a set of follow up recommendations were provided.