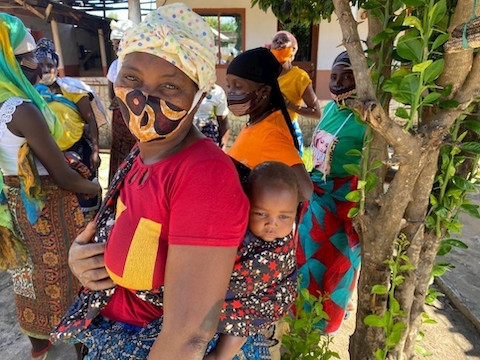 This is a summary of what was said by UNHCR spokesperson Babar Baloch – to whom quoted text may be attributed – at today's press briefing at the Palais des Nations in Geneva.

UNHCR, the UN Refugee Agency, remains gravely concerned for the safety of civilians in northern Mozambique as armed conflict and insecurity in the coastal city of Palma continues to displace thousands of people, two and a half months after a brutal attack by non-state armed groups. People are fleeing daily in a desperate search for safety both in Mozambique and across the border in Tanzania.

Those fleeing have told UNHCR staff that the situation in Palma remains very unstable, with regular gunfire at night and torching of houses.

Some 70,000 people have fled Palma since 24 March, bringing the total number of displaced in Cabo Delgado province to nearly 800,000 according to humanitarian estimates.

UNHCR continues to advocate for the internally displaced to receive protection and assistance in Mozambique and for vulnerable people seeking safety in neighbouring Tanzania to access asylum.

The ongoing insecurity has forced thousands of families to seek refuge in the south of Cabo Delgado and Nampula provinces. The districts of Nangade, Mueda, Montepuez, Ancuabe, Metuge, Balama, Namuno, Chiure, Mecufi, Ibo and Pemba continue to register new arrivals every day.

Thousands of others are reported to be stranded in very insecure areas around Palma with restricted humanitarian access. However, UNHCR and partner agencies were recently allowed access to some remote areas to help displaced people living in dire conditions. UNHCR continues to work with partners to assess their needs and provide life-saving assistance. We have distributed relief items to some 10,000 displaced people.

Many others have attempted to cross the river that marks the border with Tanzania to seek international protection.

According to Mozambican border authorities, more than 9,600 of them have been forcibly returned through the Negomano border point since January this year. Some 900 were pushed back into Mozambique in just a few days from 7 to 9 June. UNHCR teams have been supporting people arriving in a desperate condition, many separated from their family members.

Those pushed back from Tanzania end up in a dire situation at the border and are exposed to gender-based violence and health risks as many are sleeping in the open at night in extreme cold without blankets or a roof over their heads. There is an urgent need for emergency relief items including food.

UNHCR reiterates its call for those fleeing the conflict to have access to territory and asylum, and, in particular, for the principle of non-refoulement (no forced return) to be respected. Refugees must not be forced back into danger.