The results from UNESCO’s ‘World in 2030’ Public Survey – held from May until September this year – are in. An inclusive international call for input launched by the Strategic Transformation Support Unit, it attracted responses from more than 15000 people around the world. The results are already informing UNESCO’s reflections to ensure its programmes are responding to the real-world needs of citizens around the world over the coming decade.

"At a time of massive disruption linked to the COVID-19 pandemic, our goal was to listen to the challenges being faced by people all over the world, and they have told us loud and clear. Our programmes to address climate change, reduce violence and promote equality, especially through education, are of paramount importance. However, greater efforts are needed to address people’s specific concerns, and multilateralism is the way to do this. Restoring confidence in multilateralism requires the implementation of concrete and impactful projects, and this is at the heart of our Organization's role." 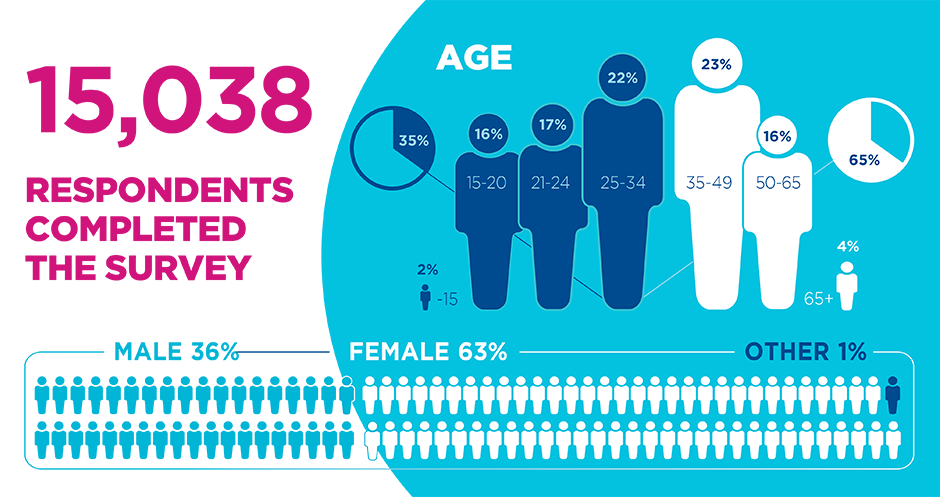 Survey respondents called out climate change and loss of biodiversity, violence and conflict, discrimination and inequality, and lack of food, water and housing as the four biggest challenges to peaceful societies leading up to 2030. Education in its various forms came out on top as a crucial solution to the many difficulties we face. And while people overwhelmingly extolled the importance of global cooperation, very few felt confident that the world can effectively overcome its common challenges. 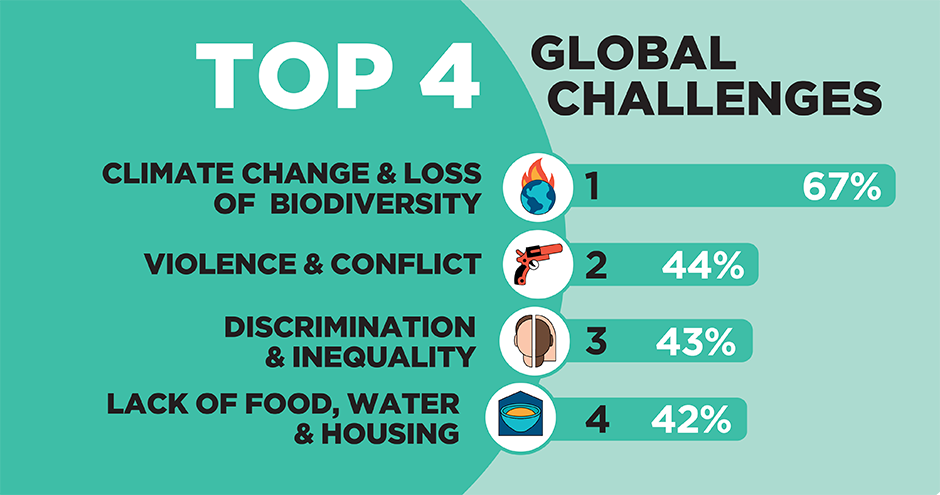 International awareness of the threats posed by climate change and biodiversity loss is higher than ever. The crises loom at global, regional and local scales, and international cooperation will be vital to stem current trends.

This was reflected in survey results, with the most respondents by far flagging this challenge as the most urgent, impacting populations internationally and close to home. People were most worried about increasing natural disasters and extreme weather, biodiversity loss, risk of conflict or violence, impacts on oceans, and, critically, less and less hope to solve the problem.

To address the challenge, respondents favoured investment in green solutions, education on sustainability, promoting international cooperation, and building trust in science. These results indicate that UNESCO’s work in climate change and biodiversity, as well as disaster risk reduction,  education for sustainable development, ocean health and open science are valuable tools in the fight against climate change and biodiversity loss.

Other top challenges that people indicated were important to them included:

Interestingly, young people (under 25) cited concerns about discrimination and inequality more often than respondents from older age groups. There was also more concern about violence against women and LGBT people in this age bracket, a trend reiterated in responses from women.

Discerning these patterns helps identify which challenges are the most important to engage on with youth, who, as the future leaders of society, were seen as perhaps the most important target group of the survey. As such, a considerable effort was made to engage young people, including through collaboration with SHS youth networks, UNESCO Chairs and ASPNet Schools, and promotion on social media. This resulted in more than half of respondents being under the age of 35. The survey was likewise translated into 25 languages with the help of National Commissions and Field Offices, who also dispersed it through their networks.

Respondents of all ages appealed for global cooperation and legal frameworks against violence and hate speech, support for technological solutions to and associations working on deprivation, and promotion of gender equality and respect for all cultures. Fittingly, education was again a top solution, with calls for teaching peace, non-violence, cultural tolerance, human rights, science and technology.

Education and global cooperation essential solutions to our many global challenges 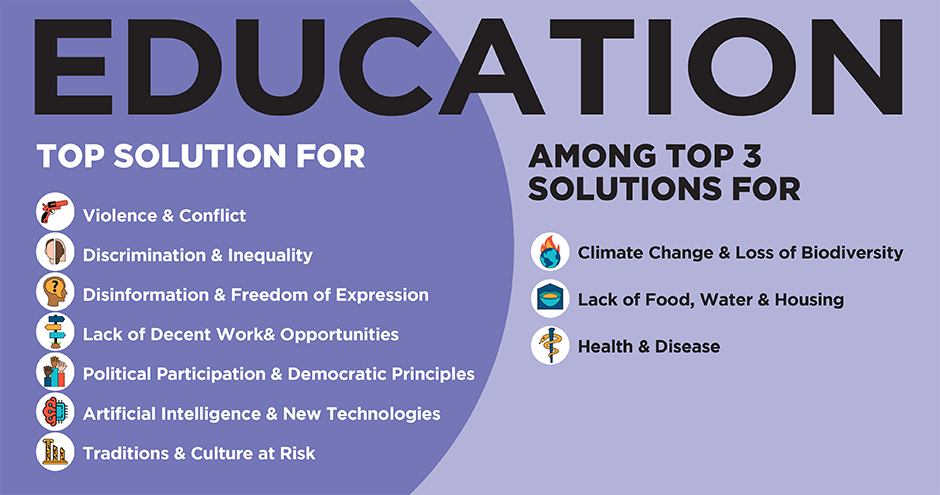 In fact, education was consistently highlighted as a solution, from teaching about critical thinking, respect, online ethics and media literacy, to promoting health, civics, heritage and gender equality. This reflects a collective conviction in the importance of education not only as an end in and of itself, but as a valid and wide-reaching solution to our many and varied global challenges. Education was also considered the area of society which will most need to be rethought in light of the COVID-19 crisis, lending credence to education programmes like the Futures of Education initiative. 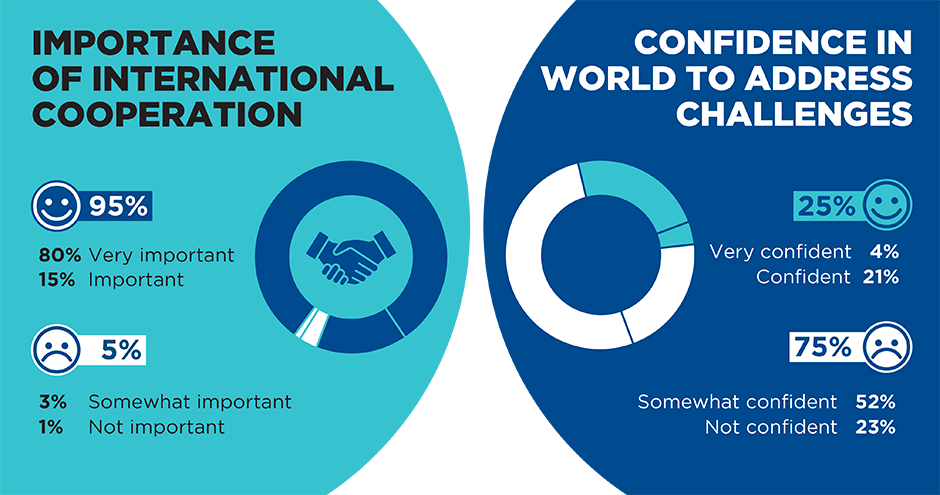 A total of 95% of respondents felt that global cooperation was vital for overcoming our challenges (including 80% who said it was “very important”), and most respondents were concerned about the impacts of challenges on the world as a whole. While this is reflective of strong global solidarity and the enduring relevance of multilateralism, there appears to be considerable concern regarding their effectiveness, with only one in four respondents feeling confident that the world would be able to address its challenges, including only 4% who said they were “very confident”.

Challenges and lessons in the time of COVID-19

Alongside education and global cooperation, respondents also pointed to the relationship between humans and nature, along with scientific cooperation and the sharing of research, as important areas of society to be rethought in view of the pandemic.

The emergence of COVID-19 has brought to the attention of many the links between public health and environmental management, including the spread of zoonotic diseases. Similarly, the issue of scientific cooperation and the sharing of research, which UNESCO is addressing through the development of a new Recommendation on Open Science and a joint appeal for open science, has become more eminent as scientists around the world share knowledge on the virus, and the global pursuit of a vaccine continues.

Numerous issues highlighted by the pandemic were also reflected in respondents’ concerns about health and disease, disinformation and freedom of expression, lack of decent work and opportunities, and political participation and democratic principles. Health and disease was ranked higher as a challenge by respondents from Asia and those who identified as indigenous, coming in second place overall. People cited concerns about the reliability of information and deliberate spread of falsehoods, poor leadership, corruption and lack of political accountability, attacks on the media, inadequate education systems, inequality in the labour market, and the global decline of democracy. In addition to those already discussed, solutions included support for quality journalism and fact-checking and strong legal penalties and frameworks for the spread of disinformation.

Old issues in a contemporary context: migration, technological change & the preservation of culture

Finally, respondents were also asked for feedback on the issues of migration and mobility, artificial intelligence and new technologies, and traditions and cultures at risk. When faced with the challenge of migration and mobility, people were most concerned about the human rights of migrants and refugees, the political backlash in countries receiving migrants, human trafficking or sexual exploitation of migrants, and climate change making the situation worse. They called for effective global and regional coordination on the issues, focus on development in source countries, respect for cultures and diversity, and support for integration into host communities.

When considering the emerging challenges posed by artificial intelligence and other new technologies, people were most concerned about online privacy and surveillance, ethical issues, cyberwar and new forms of conflict, and new cybercrimes. They called for education on ethics, online safety and privacy, a global ethical framework, promotion of an ethical, transparent and human focus, and prevention of online crime.

Those identifying as indigenous ranked the risks for traditions and culture higher than others. When dealing with this challenge, people were most concerned about cultural heritage and practices disappearing, globalisation leading to loss of heritage or identity, young people’s disinterest in their cultural heritage, and lack of support for creative industries. They called for the integration of culture and heritage into education systems, the promotion of intercultural exchange and respect of diversity, the engagement of young people with their traditions, and the safeguarding of cultural heritage sites and practices.

Orienting UNESCO’s strategic direction for the World in 2030

The World in 2030 survey was developed by the Strategic Transformation Support Unit, with the financial support of the Canadian Commission for UNESCO, in the view of enriching UNESCO’s current reflections on the future of its programme over the rest of the decade. This reflection has also been supported by the results of a very successful staff survey, inputs from Young UNESCO, and the work of the Director General’s High Level Reflection Group. The reflection process is an important part of the Organisation’s Strategic Transformation, which is entering its final phase. This process will ultimately culminate next year in the approval of UNESCO’s Medium-Term Strategy for 2022 – 2029, an invaluable roadmap in this vital decade leading up to 2030.