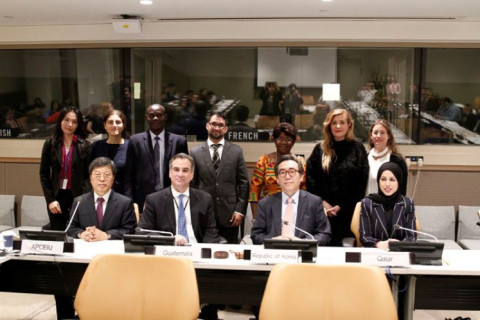 Approximately 70 participants, including Ambassadors to the United Nations, high-level officials of the United Nations, academia, and international organizations, attended the Forum. Under the overarching theme "GCED as a key enabler of Sustainable Development Goals (SDGs), the Forum shared best practices of GCED and sought for collective efforts to promote GCED across the globe.

In the opening remarks, Ambassador Cho Tae-yul of the Republic of Korea to the United Nations mentioned that the new role of education in addressing global issues such as violent extremism and climate change has been emphasized as the countries are getting much more closely interconnected than ever before. With an emphasis on the transformative education to build a more inclusive and peaceful society, he underlined the joint endeavour for the designation of the International Day of Global Citizenship Education.

The first session was kicked off by Chung Utak, Director of APCEIU who moderated the session. During the session, best practices of GCED in Colombia, Ghana, Mexico and Oman were shared with the audience.

Ana Maria Velasquez, Associate Professor of the Universidad de los Andes, introduced the Colombian context originated by peace agreement which took place at the end of a prolonged conflict, and emphasized the demand for GCED to achieve a sustained peace. Joyce Afutu, Director of Communications and Corporate Affairs, National Commission for Civic Education claimed that Ghana has been leading the way in implementing GCED by sharing various practices taken in Ghana such as teachers’ capacity-building workshops, UNESCO ASPnet Schools, and community-based group activities. Adding to that, Cyomara Inurrigarro who is a teacher at Normal Miguel F. Martinez School in Mexico introduced her story of promoting GCED in UNESCO ASPnet Schools in Nuevo Leon region through the pre-service teacher training programme on GCED. Lastly, Khalaf Marhoun Al'Abri, Assistant Professor of Education Policy, Sultan Qaboos University presented about the Omani efforts in applying GCED to pre-schools, public schools and higher education systems.

The following session mainly addressed methods of promoting GCED and designation of the International Day of GCED. See the panellists as follows:

While sharing a variety of researches and practices on GCED at national level, the panellists reaffirmed GCED is the key enabler of SDG 4.7. It was actively debated that a global citizen is a person who holds universal values such as justice, equity, respect, dignity and understands global issues, and embraces their own heritage (identity) but transcends cultural differences. Furthermore, it was also mentioned that “GCED for all” can be achieved when it comes to consolidated partnership between multiple stakeholders. Also, it was suggested that since GCED for quality education and SDGs are closely interconnected, collective action and international cooperation are necessary in designation of the International Day of GCED. Finally, the importance of designation of International Day of GCED was emphasized because when the International Day of GCED is designated, voice about GCED will be louder through the UN, a powerful platform.