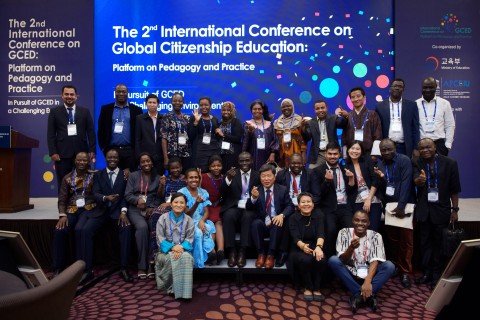 With the rise of radicalism and nationalism, we have faced the increasing number of hate crimes against specific race, ethnicity, gender or cultural group and, consequently, an antagonistic atmosphere has been prevalent across the globe.

Under these circumstances, there has been an ongoing demand for rethinking the role of Global Citizenship Education(GCED). In response, APCEIU held the 2nd International Conference on GCED from 13 to 14 September 2017 in Seoul to gather GCED practitioners and experts all over the world. Under the overarching theme of ‘in pursuit of GCED in a challenging environment’, this Conference was co-organized by the Ministry of Education of the Republic of Korea in partnership with UNESCO HQ. This Conference successfully provided a platform where participants discussed the challenges we have face globally, nationally and locally when it comes to implementing GCED and reflected upon the direction of GCED.

This Conference attempted to provide interactive sessions which encourage participants to actively participate in, consisting of various plenary sessions and concurrent sessions. The plenary sessions intended to give an integrated overview on the theme of the Conference, while the concurrent sessions consisted of diverse programmes as panel discussions, case presentations, participatory workshops, theater and debate chamber. Beyond its emphasis on the importance of global citizenship, this Conference enabled discussions on how to make the world more peaceful, inclusive and sustainable and how GCED can address current imperatives.

The first day of the Conference was initiated by a panel discussion which brought together a panel of experts and practitioners from respective fields of GCED. Entitled ‘how can we pursue GCED in a challenging environment’, the panel discussion touched upon the challenges that they have faced and the achievements made by tackling these challenges in each field, region and practice.

The plenary session 2 took the format of a town hall meeting in which every participant exchanged their perspectives and actively debated with each other. More than 400 participants shared their views and ideas through Mentimeter, the real-time online voting tool.

In the concurrent session 1 titled ‘exploring practices of GCED and their impact,’ participants discovered how GCED has been practiced and what kind of difficulties it has been facing specifically throughout primary and secondary education, higher education and civil society organizations. This session encompassed practices on GCED in all types of education-formal, informal and non-formal.

The second day kicked off with the plenary session 3, which was led by a brief performance that embodied an ethos of global citizenship. The topic was ‘GCED in Action’ and the performance was given by the Philippine Educational Theater Association (PETA). The session was designed to provide hands-on experience wherein the audience can feel the importance and message of GCED through the medium of theater.

Furthermore, as GCED is considered to be delivered through diverse mediums such as participatory activities, the concurrent session 2 attempted to focus on democratic dialogism, transformative pedagogy and how to teach controversial issues.

In addition, comprised of distinctive three sessions, each session in the concurrent session 3 addressed supportive conditions to scale up GCED. Each session covered education policies, curricula and teacher education respectively, shedding light on the challenges that we have faced in implementing GCED and sharing the recommendations suggested by experts in their fields.

The youth debate chamber, a special session, was organized during the concurrent session 3. Under the motion of ‘Can global identity and national identity coexist? ,’ the four debaters were divided into two groups which held different views-pros and cons. The audiences were required to cast their votes in favor of the side they support two times-in advance of the debate as well as after the debate, and the side that obtained the biggest number of votes in the end won the debate.  Interestingly, the result of the initial vote was reversed at the moment of the final vote.

Subsequently, Cho Heeyeon, the Superintendent of Seoul Metropolitan Office of Education gave a special lecture on ‘Global Citizenship Education for Empathy & Coexistence’, which introduced the process and accomplishments of GCED in the context of education in Seoul.

The 2nd International Conference on GCED provided opportunities to exchange and deduce various ideas to effectively resolve issues by which GCED is currently confronted. The Conference (except concurrent sessions) was live-streamed online for those who were interested in GCED.