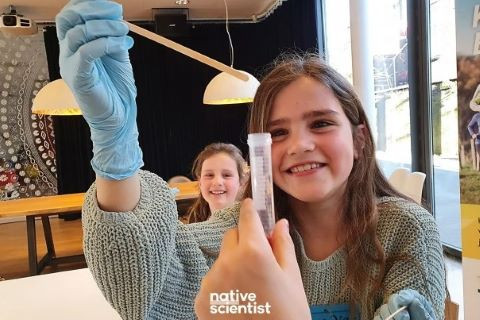 Native Scientist is a non-profit organization, founded in 2013, with the aim of building meaningful connections between migrant children and scientists to foster language development, reduce inequalities and celebrate diversity. Since its foundation, Native Scientist has organized nearly 300 workshops in 13 different languages across 12 European countries and has built over 20 000 meaningful connections between children and scientists.

The ‘Native Scientist’ programme has been developed with the aim of promoting scientific and language literacy among migrant children by connecting them with international Science, Technology, Engineering, Mathematics and Medicine (STEMM) professionals, through innovative workshops in schools. During the workshops, where a content and language integrated learning (CLIL) approach is followed, the scientists and the learners share the same common cultural heritage and speak the same native language, allowing students to learn scientific subjects, further develop and improve their native language skills, and, at the same time, be inspired by the interaction with role models.

The founder, Dr Joana Moscoso, decided to start the programme inspired by her personal career experience. Indeed, as a migrant, woman and scientist in London she decided to create the programme in order to allow migrant children to familiarize themselves with science and avoid facing the same barriers she encountered in the beginning.

Together, Dr Moscoso and co-founder, Dr Tatiana Correia, they started to gather Portuguese-speaking scientists with Portuguese-speaking children, in London schools. Today, the programme has reached 28 different cities in 9 European countries, targeting a wide range of migrant communities. From 2018 to 2021 around 1,800 learners successfully completed the programme, among of them 60 per cent are women.

‘’Being an organization based on a network of more than 1 000 scientists, we know first-hand that learning is a lifelong experience. In the fast-paced, fast-evolving society we live in, literacy at several levels is increasingly needed, be it language literacy, digital literacy or science literacy, among others, to better understand the world we live in and to better adjust to the challenges that are imposed on us’’, shared Dr Moscoso.

Under this belief, the programme has developed and implemented a new paradigm of teaching and learning, building a unique and attractive learning space, which is strategically tailored for underserved and migrant children and based on a relationship -centric approach, where the in person direct interaction between scientists and students is at the core. This approach allows children to broaden their horizons and open up to possible future scientific career paths, looking at them as more real viable options.

With the COVID-19 pandemic, ‘Native Scientist’ programme had to face important challenges to guarantee the continuity of its learning activities. While keeping the prgramme’s initial principles and objectives, they had to switch to online format, adjusting internal processes, creating new workflows and preparing new contents. Today, they offer both online and in person formats.

Beyond receiving the UNESCO prize, Native Scientists hope that, “the civil society and governments join forces to effectively narrow the literacy gaps that still exist in the world today” and stresses the importance of “levelling the playing field so that everyone can reach their full potential no matter where they live or where they come from.’’

To celebrate the International Literacy Day, Native Scientist calls to action all relevant stakeholders from scientists, scientific higher education institutions, teachers, foundations, embassies, cultural institutions and government to open up and support innovative learning approaches like this one and contribute to transform education. Moreover, they shared an encouraging message to all people, young and old, “To reach out to others with genuine openness and interest, acknowledging that strength and learning arises when all voices are heard’’.