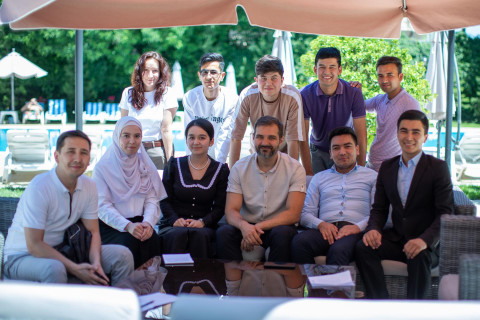 The dust storms that have been observed more frequently in recent years in Uzbekistan are a negative consequence of human activity and are associated with the use of fossil fuels, deforestation and inefficient use of water resources. Human activities also resulted in increasing the concentration of greenhouse gases in the atmosphere and in the global warming due to the greenhouse effect, which heating the Earth's surface and atmosphere. This affects on the natural ecosystems and humanity.

The situation aggravates and requires urgent measures to be taken by the government. In 2021, at the 26th Conference of the Parties of the UN Framework Convention on Climate Change, Uzbekistan has announced its more ambitious nationally determined contributions (NDCs) on to reduce specific greenhouse gas emissions per unit of GDP to 35% by 2030 from 2010 the base year. To achieve this goal, the country plans to develop a National Low-Carbon Development Strategy, and the role of youth in the implementation of this strategy is fundamental.

On May 24, the students of Uzbekistan participated in the climate talks “On the way to a common vision of Uzbek youth in climate action”. The outcome of the talks is a video message of a common statement formulated by the students, which announces their proposals for required climate actions, the role that the youth in achievement of the climate related commitments taken by Uzbekistan at the international level, including greater utilization of renewable energy sources. "Young people in the future will be responsible for decision-making and play a central role in the implementation, operation and promotion of green technologies," the statement says.

Previously, the participants of the talks participated in the study tours to renewable energy facilities located in Tashkent region and Tashkent city. Students familiarized with solar power plants generating electrical energy into the grid, which were constructed by the private investors.

Moreover, all students passed an online training course on climate change negotiations from which they gained knowledge about the measures and actions undertaken by Uzbekistan towards combating climate change.

Students discussed introduction of green technologies, sustainable mechanisms of their financing and strengthening the legal framework.  They also noted that the conditions in the country allow scientists to actively develop new technologies related to the production of green energy. For their successful harnessing, the expansion of research and development is required.

The climate talks “On the way to a common vision of Uzbek youth in climate action” were organized within the framework of the regional project ‘Policy action for climate security in Central Asia - Phase II’, implemented by UNDP in cooperation with the Center of Hydrometeorological Services (Uzhydromet) of the Republic of Uzbekistan, and funded by the UK Foreign, Commonwealth and Development Office (FCDO).