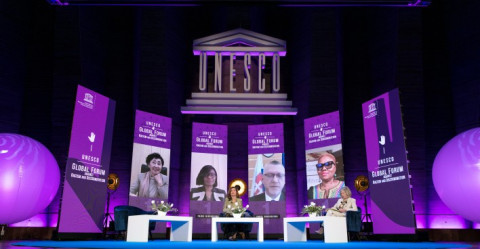 "Fighting racism is part of UNESCO's DNA. It's history. We are working to erect effective bulwarks against racism in people’s minds."
-- Audrey Azoulay, Director-General of UNESCO

With these words, Audrey Azoulay, Director-General of UNESCO, opened the first Global Forum against Racism and Discrimination, co-hosted with the Republic of Korea, mobilizing a powerful global effort to step up UNESCO’s actions to tackle the alarming increase in racism and discrimination in all regions of the world. Organized on 22 March 2021, in the context of the International Day for the Elimination of Racial Discrimination, the Forum was a direct response to the strong ‘Global Call against Racism’ adopted by UNESCO Members States. 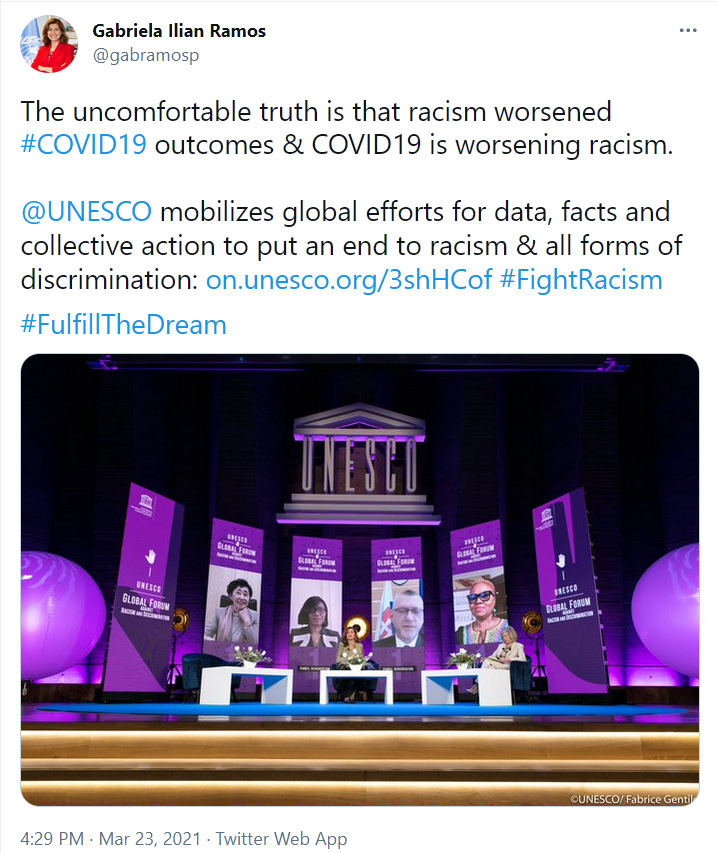 Bringing together Ministers from several countries – including France, Mexico, Republic of Korea, Slovakia, South Africa, and the United Arab Emirates – experts, practitioners, and champions, the Forum built concrete insights and solid commitments through which UNESCO will construct an ambitious new Roadmap against racism and discrimination. The Roadmap aims to mobilize UNESCO’s crosscutting expertise, based on solid evidence-based social and human science research, to tackle the legal and institutional foundations which continue to perpetuate discrimination, and change mindsets to favour inclusion and mutual respect. It will position UNESCO to effectively combat racism and discrimination within the post-COVID context, building on its more than 70 years of moral and intellectual leadership on the issue, and leveraging its strong capacity to find intersectoral solutions through existing work on global citizenship education, the promotion of cultural diversity, the fight against hate speech, the combatting of mis and dis-information, and the mobilization of the social and human sciences to understand the problem.

"We need to look deeper than just the individual racist attack. We need to focus on racism at the institutional level. We need to get the laws right"
-- Denise Yvonne Aki-Sawyerr, Mayor of Freetown, Sierra Leone

The discussions at the Forum underscored that whilst racial discrimination remains prevalent and pervasive in contemporary societies, strong and independent national institutions can help to provide solid legal and regulatory protections to counter discrimination. The importance of practical approaches to support such efforts, such as UNESCO’s forthcoming scanning exercise and integrated anti-discrimination toolkit, was repeatedly underlined.

"Racism and discrimination are a clear challenge, and it is a challenge that requires an immediate response. To this end, there is a need more than ever for international cooperation and the support of multilateral institutions, including UNESCO."
-- H.E. Choi Jongmoon, Vice Minister of Foreign Affairs, Republic of Korea

"We need to develop an official mechanism and enact legislation for banning discrimination and realizing equality."
-- H.E. Young-ae Choi, Chairperson of the National Human Rights Commission of the Republic of Korea

Panelists addressed the mutability of racism, and the need for policymakers to understand emerging forms of discrimination that require innovative responses to be effectively tackled. COVID-19 has exposed many of these new manifestations of racism, not least those related to inequities in the access to, and benefits from, digital technologies. Calls were made for a strong ethical foundation to ensure technological progress is inclusive and absent of bias, and the work UNESCO is advancing to prepare a new normative standard on the ethics of artificial intelligence was strongly welcomed in this regard.

"It goes back to human decency and respect. We need to treat people as we want to be treated. If we start off with that notion "Treat my human fellow being as I want to be treated" we'll be halfway towards winning the battle."
-- Martin Luther King III

The importance of forging partnerships and coalitions across different sectors and levels of government was also highlighted. Broad recognition was made to the critical nature of such collaboration for tackling the compounding effects of racism with other forms of discrimination, particularly that leveled on the grounds of gender. Additionally, the importance of providing support to local decision makers as those who are on the frontline of tackling racism and discrimination was stressed, and the essential role that networks such as UNESCO’s International Coalition of Inclusive and Sustainable Cities provide in this regard was recognized. Martin Luther King III, emphasized the importance of strong collaboration in his intervention, saying ‘we must create a partnership. For it is when you bring all the stakeholders together that it becomes possible to develop strategic plans and effect change.’

"Racism does not only hurt those directly affected; it challenges the trust and cohesion that holds our societies together."
-- Gabriela Ramos, UNESCO Assistant Director-General for Social and Human Sciences

Closing the Forum, Gabriela Ramos affirmed that the Forum had equipped UNESCO with the strong insights and ideas needed to take forward this critical agenda through the new UNESCO Roadmap against Racism and Discrimination. She committed to continue the process of inclusive partnership to ensure the Roadmap represents an ambitious, intersectoral vision and practical strategy, echoing the words of Stefania Giannini, UNESCO Assistant Director-General for Education, and Firmin Edouard Matoko, UNESCO Assistant Director-General for Priority Africa and External Relations, who also participated in the Forum.

Accompanying the Forum, the Republic of Korea launched a social media campaign  using the Forum’s hashtags #FulfillTheDream #FightRacism, bringing together a significant number of Ambassadors of the Group of Friends for Solidarity and Inclusion with Global Citizenship Education in UNESCO to reaffirm their commitment to this important issue.

UNESCO intends to make the Global Forum against Racism and Discrimination an annual occurrence, providing an opportunity for the organization and its partners to take stock of progress at the same time next year.