Gender equality in education: Digging beyond the obvious
Post date:
2021/07/22 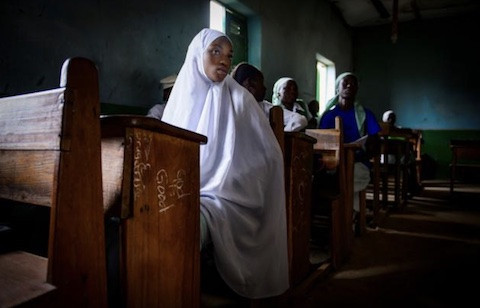 Young girls in class in the Kaduna region of Nigeria.

When we talk about gender inequality in education, we first think about the barriers to schooling for girls and young women. And for good reason: three-quarters of the children who are at risk of never going to school are girls. Yet disparities exist in other dimensions of education, sometimes to the detriment of boys. To reduce them, IIEP-UNESCO favours an intersectional approach, which looks at gender through all other forms of discrimination and social exclusion. Here is how it works.

Globally, progress towards gender parity in schools has been significant over the past 25 years. According to UNESCO data, the number of girls enrolled in primary and secondary school has increased by 180 million over this period, including 69 million in sub-Saharan Africa. Yet girls and young women still face the most severe forms of exclusion, which are the result of several cumulative factors. Among them are socio-economic status, place of residence, ethnicity, religion, and living with a disability.

As a result, nine million girls aged 6 to 11 will never go to school worldwide, compared to about three million boys.

The recent Education Sector Analysis (ESA) of Sierra Leone shows that only 5% of poor, rural girls complete secondary school, compared to 68% of urban boys from better-off backgrounds. This high vulnerability of rural girls has also been observed in Nigeria. These two recent gender-sensitive ESAs are part of the Priority to Equality Initiative, the technical component of which is led by the IIEP-UNESCO Africa Office.

Beyond the issue of schooling, gender inequalities are manifested in other components of education, such as learning or school guidance. Two types of obstacles are generally distinguished. On the one hand, are those related to the educational offer, which are directly related to education systems, policies, or schools. On the other hand, are those related to the demand for education, i.e. the obstacles inherent in families, children, and society at large. Ultimately, all these factors are linked and impact each other. Contrary to popular belief, gender disparities in education also weigh on boys. The social expectation for young men to earn an income can lead them to drop out of school before the end of lower secondary school. They may even never attend school to help their families.

In Sierra Leone, 67% of boys who drop out of school do so for economic reasons, compared to 53% of girls, according to the ESA. In Nigeria, food shortages during the rainy season and armed conflict in some areas are seen as additional barriers to boys' retention and completion.

Around the world, IIEP observes the growing political and legal commitment of countries to gender equality in education. While early pregnancy and early marriage are among the leading factors in girls' dropout from secondary school in sub-Saharan Africa, many states have recently lifted bans that previously prevented pregnant girls from attending classes. Sierra Leone and Mozambique, for example, did so in 2020. This is an example of a significant step towards more inclusive education. "However, the presence of entrenched gender norms at the local level, combined with weak institutional capacity, can hamper the implementation of gender policies and strategies in education," explains Fabricia Devignes, Head of the Gender at the Centre Initiative at IIEP-UNESCO Africa Office.

Social gender norms are the set of implicit ideas, stereotypes, and rules that consciously or unconsciously dictate how a person should supposedly be and act, depending on whether they are a woman, man, girl, or boy.

These norms manifest themselves, for example, through an unspoken rule that men should be strong and financially support their families. Or through the conditioning of boys' educational orientation towards technological and scientific paths, and less towards 'care' professions, for example (personal services, health and social work), associated with lower salaries. In Niger, only 6% of science, technology, engineering and mathematics graduates are women.

Schools can play a key role in challenging these gender norms, the impact of which can have serious consequences for children's education and women's economic empowerment. But it can also reinforce and reproduce them, if education policies and systems are not based on the principles of gender equality.

"In education, we see significant differences in the treatment of girls and boys, linked to socio-economic realities, ethnicity, vulnerability to conflict, or gender norms. Taking these specificities into account is a way to produce more comprehensive and effective education sector analyses and plans.

Fabricia Devignes, Head of the Gender at the Centre Initiative at IIEP-UNESCO Africa Office

Gender-sensitive educational planning is not limited to the formulation of strategies to combat gender inequalities. It must take into account the weight of gender norms and social roles in both process and content.

In addition to IIEP's support for the whole process of gender-sensitive planning, strengthening the gender sensitivity of budgets is one of the technical levers promoted by the Institute to the member countries of the Gender at the Centre Initiative. This approach ensures that investments in the education sector advance gender equality.

IIEP also works with countries on gender mainstreaming within education administrations. The aim is to strengthen their capacity to introduce gender into their operations in a systematic and considered way. This includes building the capacity of all staff in ministries of education on gender issues at all levels. It may also involve increasing the representation of women in senior positions in ministries of education.