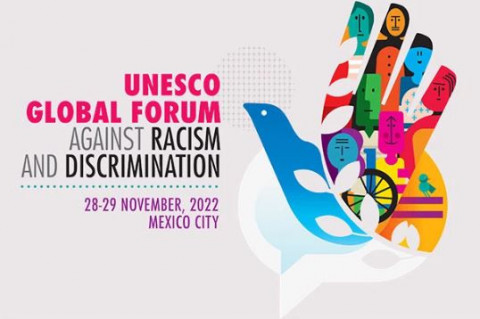 UNESCO will hold the second Global Forum against Racism and Discrimination, in Mexico City, Mexico, from 28 to 29 November 2022. Building on the first edition, this Forum will focus on the Post COVID world, and the cost-of-living crisis, to directly address the adverse impact that racism and discrimination have had on the most vulnerable populations, including migrants, women, adolescents and girls, people of African descent and of Asian origin, and others. Now is the moment to catalyze action on prioritizing the fight against racism on the international agenda. UNESCO is mobilizing key stakeholders to uphold commitments against racism and discrimination within an unusually challenging geopolitical and social context.

Media are invited to participate in all panels and side events, whether online or on site. For this purpose, you are kindly invited to register here.

Today, our societies are confronting multiple challenges. They have not yet recovered from the impact of the pandemic, and the war in Ukraine, the cost-of-living crisis, and the looming recession in many economies are putting  additional pressures on vulnerable communities. Racial minorities and discriminated groups are frequently those that experience  the worst effects of crises. At this global forum, participants will seek ways of combining the solutions to the current crises, while at the same time focusing on the need to uproot the systemic, structural, and institutional racism that continues to pervade societies across the world.

UNESCO will use the forum to encourage its Member States to upgrade their legislative frameworks, institutional capacities and financial resources to the fight against racism. Prominent champions against racism will take the floor, best practices will be identified and partnerships among participants will be fostered.

The Forum is led by high-level representatives of the Mexican Government and by Gabriela Ramos, UNESCO’s Assistant Director-General for Social and Human Sciences, who oversees this agenda for the Organization. She will be accompanied by well-known champions against racism:  Xueli Abbing, UNESCO Goodwill Ambassador; Kailash Satyarthi, Nobel Peace Laureate 2014; Darren Walker, President of the Ford Foundation; Martin Luther King III; Elisabeth Moreno, former Minister Delegate for Gender Equality, Diversity and Equal Opportunities of France; Tenoch Huerta, Mexican actor; and writers from around the globe including Evelina Cabrera (Argentina), Tania de Montaigne (France), and rapper "Webster” (Canada). Activists from civil society will also present their ideas and initiatives, including those which support indigenous populations in Latin America.

During the Forum, Canada, the United States of America, and Mexico will discuss the opportunity to build a North American Partnership for Racial Equity. UNESCO will work with these countries in advocating for multistakeholder partnerships, as part of its Roadmap against Racism and Discrimination. High-level representatives present at this occasion will be Ahmed Hussen, Minister of Housing and Diversity and Inclusion of Canada; Peter Flegel, Executive Director, Federal Anti-Racism Secretariat, Canadian Heritage; Desirée Cormier Smith, Special Representative for Racial Equity and Justice, U.S. Department of State; and Aureny Aguirre Sunza, Ambassador, Ministry of Foreign Affairs of Mexico.

The new “Writers against Racism” initiative will also be launched, aiming to shine a light on the resurgence of racism, and to change mindsets, attitudes and behaviours and inspire action, both on an individual level and a global scale. In addition, the artwork against discrimination of painter Krytzia Dabdoub will be unveiled, and the “Tree of Peace” of Hedva Ser will be planted.

The Forum will also provide a platform for high-level representatives from governments, mayors from the International Coalition of Inclusive and Sustainable Cities – ICCAR, public policy experts, academia, scientists, civil society actors, NGOs, artists and creatives, the private sector and media to exchange on the way forward.

The Forum will set the venue to release the latest research on racism and discrimination by UNESCO; the unveiling of a scanning exercise on good practices and a toolkit to counter this problem, and the launching of the work on “Changing MENtalities”, to engage boys and men in countering social norms and stereotypes that harm women, but that also produce toxic environment for men.

An Outcome Document that will reflect the common vision of Forum participants and call for action will be adopted at the end of the Forum. The outcome of the Forum will inform UNESCO’s action against racism.