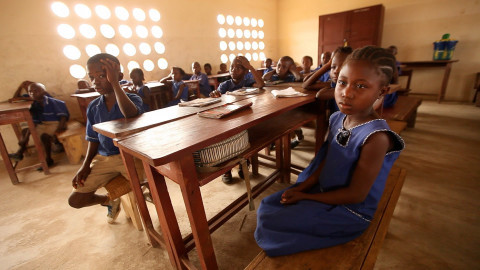 As one lockdown week morphs into another, the learning of millions of students continues to be disrupted. UNESCO figures show, on average, two-thirds of an academic year has been lost worldwide due to COVID-19 school closures. The learning loss is enormous. The question now in everyone’s mind is: How do we help students who have fallen behind to catch up?

One way of addressing this crisis might be to repeat the entire academic year, as some are calling for. The government in Kenya has already decided to do just this, believing that having students repeat the entire year puts them all on equal footing.

Another approach is to reduce and synthesize the curriculum so that students are able to focus on a few subjects and learn them well, as Odisha, India, and Ontario, Canada, have done. Bangladesh has announced its recovery programme, which includes an abridged syllabus for the next two years, focusing on key subjects such as math, Bengali, English, and science in secondary schools.

Catch-up and remedial forms of education have been the focus of much discussion over the past several months — but what type will these be, and how much will they cost?

According to a joint McKinsey-UNESCO toolkit, there are two ways to look at this. The first is to allow students more time to learn. This could be through summer classes, weekend catch-up, or adding extra time at the end of the day. In the Philippines, for example, schools ran summer classes in 2020 to recover time lost.

A second approach involves dedicated attention through smaller breakout groups or one-to-one tutoring for the most disadvantaged learners. In the United Kingdom, the government announced £350 million ($490 million) would be allocated to a National Tutoring Programme, which will provide intensive catch-up for the most marginalized students. In Ghana, the School for Life programme uses peer tutoring to increase students’ progression through school.

In Italy, the government has already implemented a programme in middle schools where university students volunteer to tutor disadvantaged students one-to-one. The impact so far has been positive. Teachers are seeing growth in students’ academic performance and improved socioemotional skills and psychological well-being, especially among students from immigrant backgrounds.

Accelerated education programmes, which condense several years of schooling into a few months, is another option. These programmes were established for children who have had their education interrupted or never started due to conflict, poverty, and marginalization.

In Ethiopia, the Speed School Model condenses the first three years of primary school curriculum in nine to 10 months. In Nepal, marginalized girls from the Musahar community, which has untouchable status, participate in a nine-month accelerated education programme that helps them catch up; over 80% transition into mainstream school.

All these approaches require increased investment in education. The Institute for Fiscal Studies in the U.K., for example, has warned that the £1.5 billion ($2.1 billion) the Department for Education has pledged is inadequate to help the most disadvantaged students.

These moves are inconsistent with the increased annual funding gap that learning losses due to school closures will create in poorer countries, adding up to as much as $200 billion per year as UNESCO’s “Global Education Monitoring Report” calculated in September. Achieving Sustainable Development Goal 4 by 2030 will be impossible unless things turn around.

The argument for finding the funds for these programmes now is that remedial and catch-up programmes are assumed to be half the price of second-chance programmes, helping learners who have dropped out of the system. We estimated that, while the cost of remediation and catch-up programmes for low- and lower-middle-income countries is around $35 billion, investing now, rather than waiting, could reduce education recovery costs by up to 75%.

It remains a struggle to convince governments that investing in education will have cumulative effects and should remain a top priority. This is a message that the education community should express clearly. Children and young people have made enormous sacrifices to keep the older generations safe from this virus. As a society, we must ensure that they don’t pay an even higher price by compromising their potential and future livelihoods. We owe it to them to invest in their education.