Promotion of Peace and Sustainable Development in the Sahel: A meeting held to develop the program's results framework and implementation schedule
Post date:
05/17/2018 - 17:13 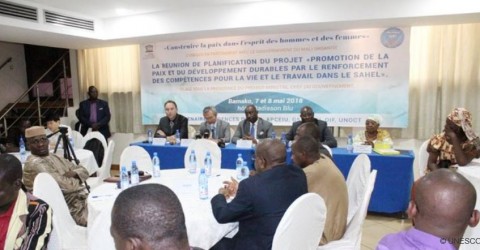 From 7 to 8 May 2018, Bamako hosted a planning meeting on the program "Reinforcement of Skills for Life and Work for Peace and Sustainable Development in the Sahel ". This two-day meeting enabled participants to develop a results framework, as well as an implementation schedule, through experience sharing with Sahelian countries, and with other countries such as Cabo Verde, the Gambia and Guinea Bissau.

The opening ceremony was chaired by Mr. Tiéman Hubert Coulibaly, Minister of Foreign Affairs of Mali, representing the Prime Minister, in the presence of Mr. Chang Gwang-Chol, Director of the UNESCO Regional Office for West Africa (Sahel), Mr. Hervé Huot-Marchand, UNESCO's Representative in Mali, Mr. Kouldjim Guidio, representative of the Permanent Secretary of G5-Sahel, Mrs Diallo Kadia Maiga, Secretary General of the Malian National Commission for UNESCO and ISESCO, and participants from Sahelian countries, such as Burkina Faso, Mauritania, Mali, and Niger. Also in attendance were countries like Senegal, the Gambia, Cabo Verde and Guinea Bissau, as well as Mrs. Mbaranga Gasarabwe, Resident Coordinator of the United Nations System in Mali, who honored the ceremony with their presence.

Mr. Chang thanked the Government of Mali for the warm welcome and accompaniment. “As we all know, youth is the lifeblood of a nation. It is the responsibility of all of us, governments, local authorities, traditional and religious leaders, social actors, international partners, etc., to accompany them in becoming responsible and resilient actors of change, citizens and leaders capable of taking control of their future and that of their country”. He welcomed the quality of the work and urged participating countries to have the various proposed activities validated by their competent authorities by the end of May 2018.

Mr. Guidio reiterated the support and the principles of his institution, which are in line with the said meeting. “For the G5 Sahel, we cannot contain violent extremism and its consequences only through security measures alone. It will be vital to integrate governance and development aspects in the search for a lasting solution by member states," he said.

For her part, Mrs. Mbaranga recalled that this meeting also supports the United Nations Secretary-General's Action Plan for the Prevention of Violent Extremism, adopted in 2016 and the UNESCO Executive Board's decision on the prevention of violent extremism. "If we do not envision where we are going, we will not be able to have either a steady culture or a lasting peace," she said.

In his opening speech, Mr. Coulibaly recalled that Mali attaches great importance to this program, which concerns youth and sustainable development, adding that the first defense against barbarism, obscurantism is the strength of the spirit. “Beyond what must be cultivated in the hearts of men, it is obvious that we must arm all the Sahel countries, morally and intellectually, so that the development models chosen, especially the economic models can be solid”. Finally, he thanked UNESCO and the experts from other countries.

The work took place in a participatory and interactive atmosphere. Participants unanimously recognized that problems were the the same in all Sahelian countries, hence the importance of joining efforts for an effective action. To do so, it is essential to rethink education systems, for all sections of the population and for all learners: students as trainers.

During the meeting, the importance of considering the most vulnerable individuals was stressed, especially illiterate populations, so that they too could benefit from training and certifications, giving them a better chance to find a job. Participants also recalled that culture is an essential aspect that should not be neglected, thus it must be fully integrated into the implementation of the program through reconnecting young people to their heritage.

Through this program, which will run for an initial period of three years, UNESCO will support countries in the Sahel, in particular Burkina Faso, Chad, the Gambia, Mauritania, Mali, Niger and Senegal, but also Guinea Bissau and Cabo Verde, under the overall coordination of the UNESCO Regional Office for West Africa (Sahel) and in collaboration with the UNESCO Regional Offices in Rabat and Yaoundé.

The meeting was organized in collaboration with the Asia-Pacific Center of Education for International Understanding under the auspices of UNESCO (APCEIU) and the United Nations.

You can listen to the radio debate on Mikado FM (Radio UN) at the following link: