Regional Technical Consultations for the Asia and the Pacific for the Revision of the 1974 Recommendation
Post date:
2022/04/22 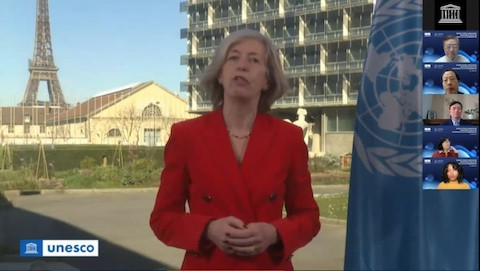 On 6-7 April 2022, APCEIU collaborated with UNESCO Bangkok to organize the Regional Technical Consultations for the Asia and the Pacific for the Revision of the 1974 Recommendation concerning Education for International Understanding, Cooperation and Peace, and Education relating to Human Rights and Fundamental Freedoms (1974 Recommendation). The 1974 Recommendation is a legal instrument that outlines principles and norms for the international law of education in support of the development of justice, freedom, human rights and peace. In 2021, UNESCO began the preparatory process of the 1974 Recommendation almost half a century ago. The revision will take into account changes in the global and educational domains in consideration of new threats and challenges that the new generation can address through learning and education.

The Plenary Sessions opened on both days with remarks from Ms Stefania Giannini (Assistant Director-General for Education, UNESCO) and Mr Shigeru Aoyagi (Director of UNESCO Asia and Pacific Regional Bureau for Education). In her opening remarks, Ms Giannini highlighted the significance of the 1974 Recommendation, sharing that “No other global legal instrument above this recommendation has been adopted to date on peace education.” She also declared, “In the face of new and very real threats, global peace and human survival, [for example] climate change, pandemics, mount inequalities, the spread of violent and hateful ideologies and disinformation, discrimination, and xenophobia – the time has come to update this instrument.” Mr Aoyagi echoed these thoughts, adding that “Modern technologies and online platforms make it easier for us to engage with experts in each region to gather input that will help revise this instrument to make it our recommendation.” The opening remarks were followed by a presentation of the historical background of the 1974 Recommendation, as well as a presentation about the revision process to provide a firm foundational understanding of the purpose of the meetings.

The opening sessions were followed by visionary statements from Dr Swee-Hin Toh (Professor Emeritus in Education at the University of Alberta, Canada; and Laureate of the UNESCO Prize for Peace Education in 2000) who highlighted the integral roles of international and intercultural understanding, nonviolent conflict resolution, social justice and nondiscrimination, and environmental care in the conception of peace within the 1974 Recommendation and underscored the need to consider these themes in relation to changes in perspectives of the world that have occurred since 1974 in our revision of the document. The second visionary statement from Ms Shamah Bulangis (Co-Chair of Transform Education hosted by UNGEI), encouraged participants to consider the need for education to be both gender-inclusive and inclusive of youth and students, while also addressing the role of intersectionality and the power dynamics that have been ingrained and evolved over many generations.

Dr Swee-Hin Toh also moderated the sessions on regional perspectives on the 1974 recommendation, which included a presentation of the 1974 Recommendation by Ms Faryal Khan (Programme Specialist for Education, UNESCO Asia and Pacific Regional Bureau for Education) and panel discussions about current trends and understandings of peace today and challenges to peace, as well as action areas for the way forward in the Asia-Pacific Region. Panellists included Ms Sonal Chheda  (National Project Officer in Policy, Mahatma Gandhi Institute of Education for Peace & Sustainable Development), Dr Ethel Agnes P Valenzuela (Director, Southeast Asia Ministers of Education Organization Secretariat) for both Day 1 and Day 2, and Ms Lea Espallardo (Resident Artist-Teacher, the Philippine Educational Theater Association) for Day 1. In this session, participants shared their opinions on the 1974 Recommendation and aspects to be revised. The majority of participants believed that the 1974 Recommendation needs to be updated, and perceived that the aim of the Recommendation should be to ‘take informed decisions and action at the individual, community, and global levels to transform society and institutions. Similarly, participants generally believed that there should be a specific provision on sustainable development focusing on environment and climate change, and that values of accountability, transitional and restorative justice, behavioural change, equity and inclusion, action, intergenerational equity, global citizenship as our new identity, peace, resilience, SDG 2030 Goals and rethinking dominant paradigms of development and globalization needed to be included and reinforced.

The Working Group Sessions were attended by select participants to examine specific sections of the recommendation and discuss what must be added or updated in the revision based on the Plenary Discussion. Director Lim Hyun-mook of APCEIU moderated the sessions on both days, in which important points were discussed. Participants deliberated the extension of our understanding of respect for diversity to include bio-cultural diversity, gender inclusivity, inter-generational learning, and an understanding of religion and spirituality as culture. In the same strain, participants suggested that it is necessary to recognize whole-community approaches and partnerships between education stakeholders in pedagogy, curriculum, and policy. Also discussed were recognition for teacher development and professional development for administrators in schools and education systems in order to facilitate their role in empowering democratic learning and teaching. Participants debated how to develop perspectives about acting for sustainable communities, such as by including principles of Global Citizenship Education (GCED) and Education for Sustainable Development (ESD).

These discussions will advise proposals to be considered by the International Expert Group that will be drafting the revision of the 1974 Recommendation.