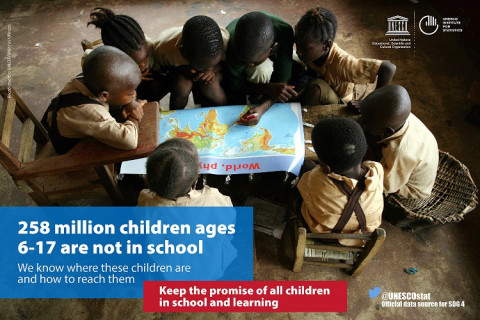 New data on the world’s out-of-school children reveal little or no progress for more than a decade, with about 258 million children, adolescents and youth out of school in 2018: around one-sixth of the global population of this age group. Published by the UNESCO Institute for Statistics (UIS), the data reinforce concerns about the prospects of reaching global education targets by 2030.

While the number appears to have dropped from 262 million in 2017 as reported last year, the fall is largely due to a methodological change in the way the indicators are calculated. Children of primary school age who are in pre-school, who were previously included in the total, are no longer counted as being out of school.

The latest figures are part of the annual UIS education data release, which includes 33 of the 43 global and thematic SDG 4 indicators. The UIS has updated its global education database for the school year ending in 2018, which includes historical time series, regional averages and indicators on key policy issues related to school access, participation and completion by education level, learning outcomes, equity, teachers and education financing (see our paper on the release). Population-based indicators, such as out-of-school children and enrolment rates, have been revised for all years using the 2019 Revision of World Population Prospects of the United Nations Population Division. Education indicators based on economic data have been also updated using the most recent 2019 data produced by the International Monetary Fund (IMF) and the World Bank.

For the first time, the UIS is publishing SDG indicator 4.2.3: percentage of children under 5 years experiencing positive and stimulating home environments. Based on a methodology approved by the Technical Cooperation Group on the Indicators for SDG 4 (TCG), the UIS has produced this indicator using household survey data mainly for low- and middle-income countries.

No progress in reducing out-of-school rates

As the custodian agency for SDG 4 data, the UIS has released the new data to inform discussions at the UN General Assembly, which will begin meeting on 17 September in New York from to examine progress towards the SDGs and the funding needed to achieve them. The data demonstrate the pressing need for more action to reach the still achievable goal of a quality education for all, and for more and better data to monitor progress on education access, completion and quality.

Until recently, all children of primary age (roughly 6 to 11 years) who were not enrolled in primary or secondary school were counted as being out of school. This included primary-age children who were still enrolled in pre-primary education. By removing this relatively small group of children (most of them in high-income countries), the total number of out-of-school children of primary age has been reduced by about 4.6 million.