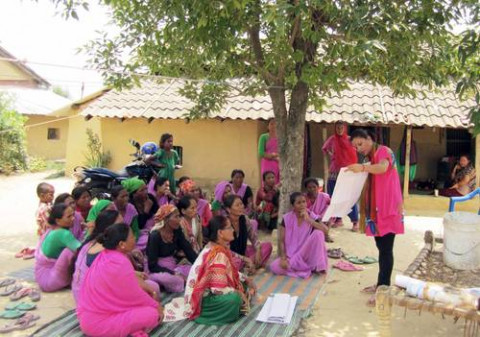 UNESCO has been promoting Community Learning Centres(CLCs) since 1999 to ensure literacy for all people and realize the potential of community-based learning. To date, 2,151 CLCs are operating throughout the country. With the aim of enhancing the capacity of CLC management and functions, the Centre for Education and Human Resources Development (CEHRD), UNESCO and UNDP have begun the process of working together to build the capacity of the CLCs on management and operations and to assist citizens to obtain information on civic education.

The process was initiated at a workshop held on August 5-9, 2019, which was attended by 26 participants, including chairpersons and facilitators of CLCs in Bhaktapur District.

Speaking at the inaugural session, Baburam Paudel, Director-General, CEHRD, said CLCs have been playing an important role in supporting the Government’s ‘Literate Nepal’ campaign, and have the potential to make a similar impact on voter education during elections.

Balaram Timilsina, Chief of Education Unit at UNESCO Office in Kathmandu, said the workshop had two major goals – to strengthen CLC management and functions, and discuss and find ways to engage them in civic education in addition to their existing roles.

Kundan Das Shrestha, Senior Electoral Advisor, UNDP ESP, said voter education was important in ensuring that elections are free and fair. He added that CLCs could play a role to ensure that citizens have the information they require to make informed choices during elections.

“Every election in Nepal is an opportunity for women to assert their right to take on leadership positions,” he said. “CLCs can play an important role in encouraging women by informing them about how they can participate, both as voters and candidates, under the existing laws.”

The sessions discussed electoral knowledge and the role CLCs could play to spread this information in the community.

The five-day workshop also had sessions on how CLCs could make plans to mobilize resources, write reports and proposals, and prepare and implement social media and communication plans.

At the end of the five days, the CLC representatives at the workshop decided to form a joint committee and make efforts to explain their roles to local governments in the district and also coordinate the voter education work they plan to do during the by-elections.