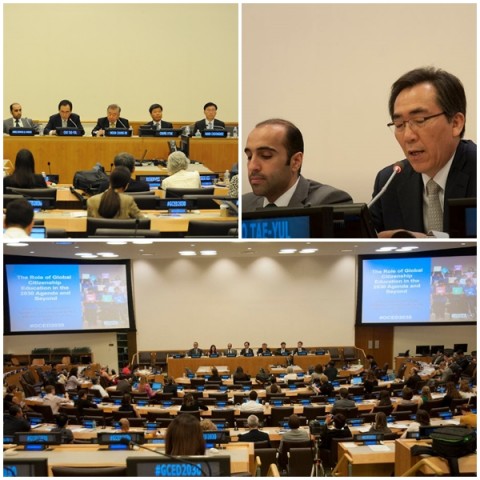 Ambassador Cho Tae-yul, Permanent Representative of the Republic of Korea to the United Nations, emphasized on the significance of GCED with the current global challenges faced mutually by humanity, and its role in realizing the mission of the United Nations. “GCED educates people to become active and responsible global citizens…towards sharing and realizing the universal values and visions which the United Nations upholds.” Ambassador Cho further mentioned that GCED contributes to the UN beyond its inclusion in the SDGs as it serves as, “…an important element of the UN’s holistic approach, strengthening the nexus among peace and security, development and human rights.”

He further addressed that in line with the mainstreaming action needed at the United Nations, the “Group of Friends on Global Citizenship Education” was established, co-chaired by the Republic of Korea and the State of Qatar. The inaugural meeting of the group was held last 1 June where 60 representatives from 35 UN Member States as well as UN Department of Public Information, UNESCO and UN Alliance of Civilizations participated. As a reply, Ambassador Abdulrahman Yaaqob Y. A. Al-Hamadi, Deputy Permanent Representative of the State of Qatar to the United Nations, expressed their pride in co-chairing the group, a common platform for member states and key stakeholders to discuss challenges and opportunities to promote GCED. Ambassador Al-Hamadi also stressed the various efforts of Qatar to promote GCED, including through its support of intercultural dialogue, and the organization of the 2017 World Education Summit for Education (WISE) with the theme “Co-exist, Co-create, Learning to Live and Work Together”. The WISE will be held in Doha from 14 to 16 November 2017.

In the opening remarks, Utak Chung, Director of APCEIU, explained that in light of the effort to prevent violent extremism, the implementation of GCED is crucial. He mentioned the full commitment of APCEIU in implementing GCED, shown in its various efforts such as the annual UN GCED Seminar, building capacities of teachers, development of curricula and policy guidance on GCED, and opening of platforms such as the International Conference on GCED and the GCED Global Network to exchange ideas and develop strategies for GCED. On a similar note, Bonian Golmohammadi, Secretary-General of WFUNA, highlighted their work on GCED, towards the goal of empowering young people to become global citizens that contribute and engage with the work of the UN and the realization of the SDGs.

On a special video message, Madame Irina Bokova, Director-General of UNESCO, expounded that the inclusion of GCED in the SDGs is recognition of its role to support an education that meets the needs and challenges of the 21st century, “…convinced that (GCED) is essential to empower learners with skills and values they need to be positive change actors.” Furthermore, she recognized the leadership role of APCEIU in the promotion of GCED, working closely together within UNESCO towards stronger and more efficient programming.

For the keynote speech, Moon Chung-In, Special Advisor to the President of the Republic of Korea for Unification and National Security Affairs and Distinguished Professor of Yonsei, drew the backdrop of the Korean case of GCED, a retrospection of how GCED came into being in the Korean context despite many challenges. Historical memory of poverty and rapid development has caused the Korean society to develop a certain culture that includes attitudes such as low empathy and high nationalism, a major barrier to GCED. As such, he put emphasis on the importance of taking history and culture into account, as is underlined in the GCED textbook developed through a consortium between various provincial offices of education in the Republic of Korea.

The panel discussion included presentations from practitioners of GCED including Karen Bryner, Director of Educate-A-Child Technical Department, Education Above All; Lily Gray, Liaison Officer, UNESCO Office in New York; Han Kyung-Koo, Professor, Seoul National University; Mareike Hachemer, Teacher and Member of the Global Goals Educator Task Force; and Theresa Ridings, Student Cohort, Lehigh University’s Global Citizenship Programme. Panelists discussed about their activities on GCED, and perspectives that they apply in doing so. The role of teachers has been stressed, in that they need to become global citizens first and to be provided with resources and capacities developed. Students beyond the formal education sector needs to be offered with opportunities on GCED, lest the cycle of marginalization will continue. As well, the message of the complementarity between national citizenship and global citizenship was an important topic in the discussion. In the words of Han Kyung-Koo, “I believe that a good patriot can be, and should be, a really good global citizen. National citizenship is not an event, it is a process, and so is global citizenship.”

At his closing remarks, Ambassador Hahn Choonghee, Deputy Permanent Representative of the Republic of Korea to the United Nations, put stress on the value of GCED beyond Target 4.7, as it achieves the ultimate goal of building peace through the United Nations. “I do not think that GCED is just a sub-target…rather it is our over-arching and ultimate goal for all SDGs, even the whole process of the United Nations. This is a common undertaking and it will be this solemn responsibility of our generation for our next generation’s children.”