We need everyone to help break the silence around mental health – UNICEF
Post date:
2021/11/14 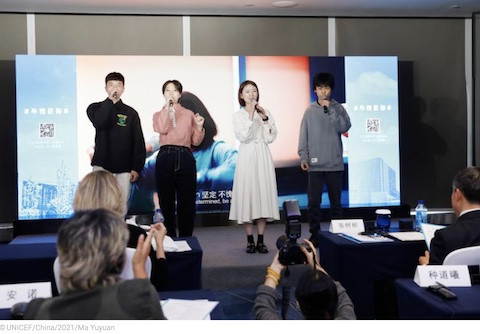 (From left to right) Wang Zelong (20 years), Perry Kan (17 years), Yu Xinwei (18 years), and Li Simo (16 years) perform a song titled ‘A Stronger You’, which was adapted from the 1980s hit song Brother Louie by German band Modern Talking, at an event on adolescent mental health in Beijing on 12 October, 2021. The four adolescent girls and boys rewrote the lyrics and recorded a new version.

BEIJING, 12 October 2021 – At an event held today, UNICEF called for societies to listen to young people, who are increasingly raising their voices for mental health, and to commit to supporting their psychological well-being.

The event was co-hosted by the National Center for Mental Health and UNICEF China, with advice from the Bureau of Disease Prevention and Control of the National Health Commission (NHC). Representatives from the government, UN organizations, experts and young people attended the activities, which included the release in China of UNICEF’s flagship publication The State of the World’s Children 2021; On My Mind: promoting, protecting and caring for children’s mental health.

Globally, almost 46,000 adolescents die from suicide each year, and suicide is among the top five causes of death for their age group. More than 1 in 7 adolescents aged 10–19 years old live with a diagnosed mental disorder. And, in middle- and upper-income countries, nearly 1 in 5 youth aged 15-24 years old reported often feeling depressed or having little interest in doing things.

In China, a survey on mental health conducted by Chinese scholars presents similar results and challenges among adolescents. 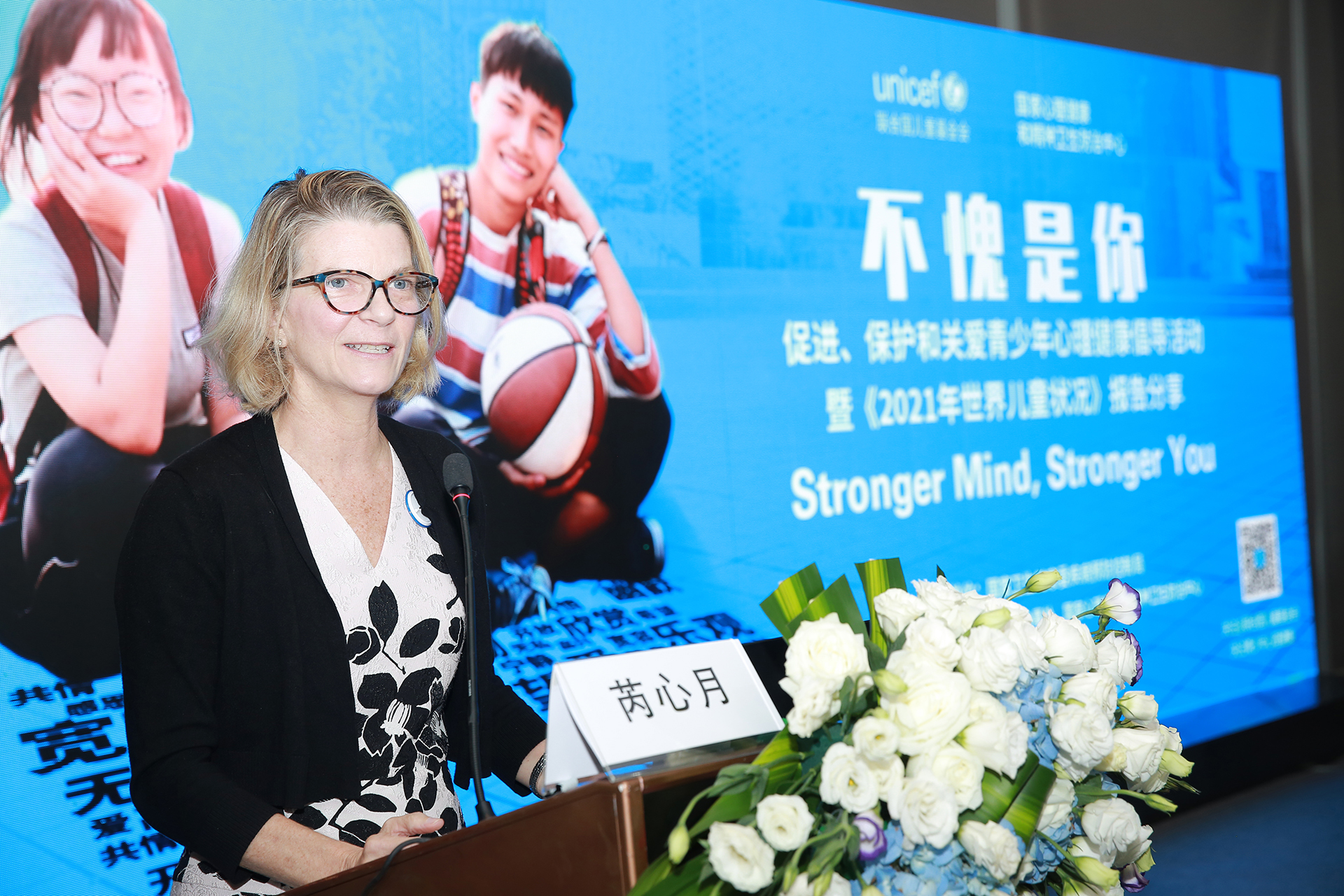 “Every child has a right to mental health. Despite growing awareness of the impact of mental health conditions, stigma is preventing children and young people from seeking treatment, limiting their opportunities to grow, learn and thrive,” said Cynthia McCaffrey, UNICEF Representative to China. “Everyone has a role to play in breaking the silence around mental health and reducing stigma. Parents, other caregivers, teachers and public figures need to create an environment where young people feel that it’s safe to talk about their mental health.”

At the event, UNICEF released a song co-created by four young people aged 16-20, as part of its #StrongerMindStrongerYou campaign. The campaign aims to start conversations among adolescents about mental health and the stigma around it.

“By listening to adolescents we hear their problems and their solutions. Young people are often best placed to help other young people. That’s why UNICEF’s mental health campaign is designed not just with young people in mind, but with their help,” said McCaffrey.

Yu Xinwei, who is a freshman at Beijing Normal University, said: “Through this song, we want to tell our peers that if they have any kind of worries around mental health, it’s understandable, and it’s normal. We hope they can be bold and voice their problems to get the support they need.” Yu performed the song with other young lyricists at the event.

The #StrongerMindStrongerYou campaign has enlisted the support of well-known figures, including UNICEF Ambassador and actor Chen Kun, Liao Zhi, who is a dancer who lost her legs in the 2008 Wenchuan earthquake, basketballer and UNICEF Ambassador Jeremy Lin, table tennis world champion Niu Jianfeng, Olympic champions Sun Yiwen (a fencer), Wang Shun (a swimmer) and Xu Xin (a table tennis player), as well as Zhu Yaming, who recorded China’s best ranking in the triple jump by winning a silver medal at the Tokyo Games. 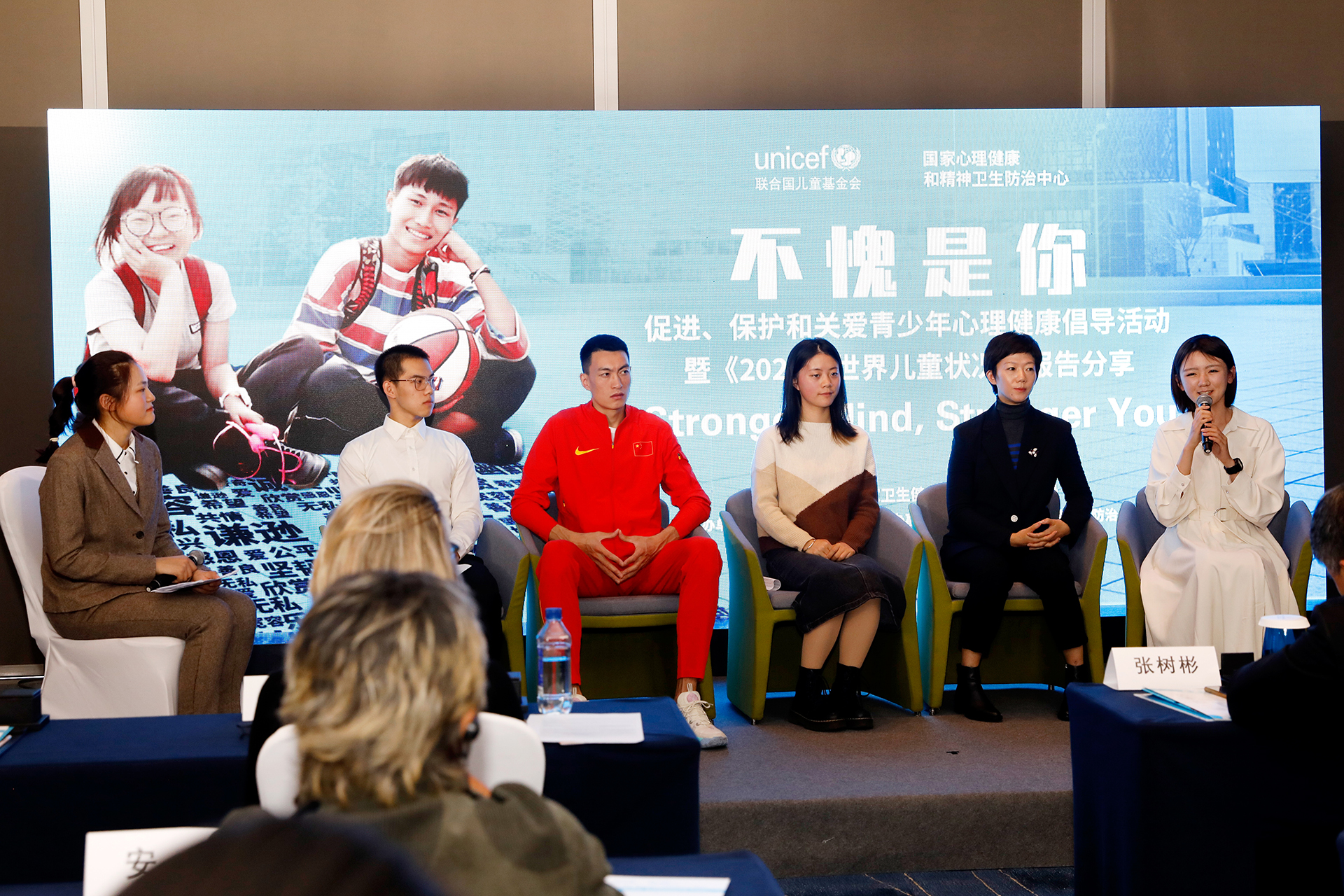 Promoting mental health for young people requires commitment and investment from a diverse range of partners and stakeholders, including governments, academics, and the private sector. In China, adolescent mental health has gained increasing attention. 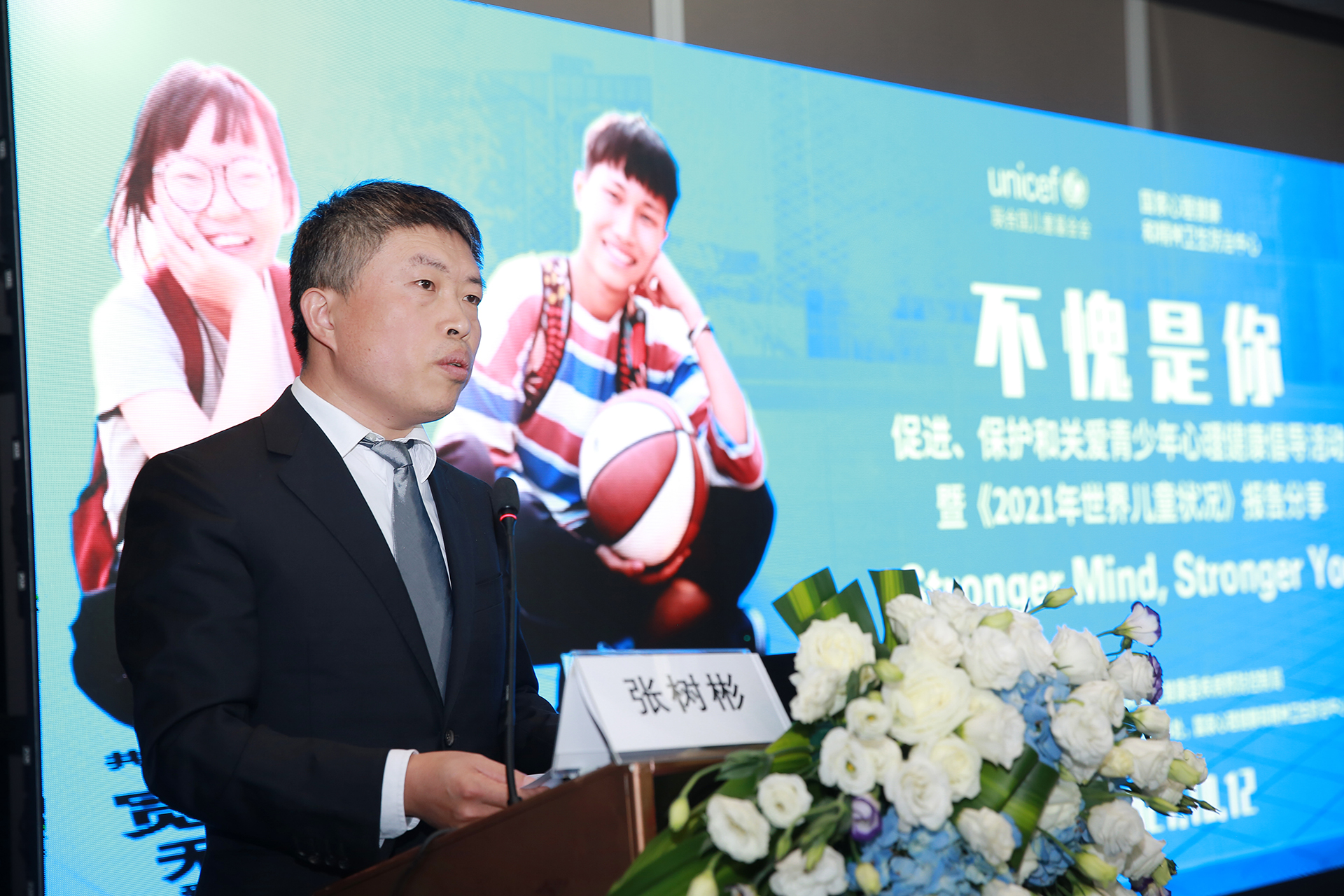 In an opening speech at the event, Zhang Shubin, Deputy Director of the Mental Health Division of the Bureau of Disease Prevention and Control under the NHC, said, “We call on governments at all levels, relevant departments, schools, health institutions, communities, social organizations and other sectors to reinforce cooperation, and to jointly maintain and promote children and adolescents’ mental health.”

“Young people’s healthy development is the country’s future and the nation’s hope. Mental health is a blessing for hundreds of millions of families, and it lays a good foundation for each young person’s healthy growth and well-being,” said Yao Hongwen, Director General of the National Center for Mental Health. “Following the country’s policy guidance, the National Center for Mental Health will keep a close watch on adolescents’ mental well-being, and promote the development of their mental health.” 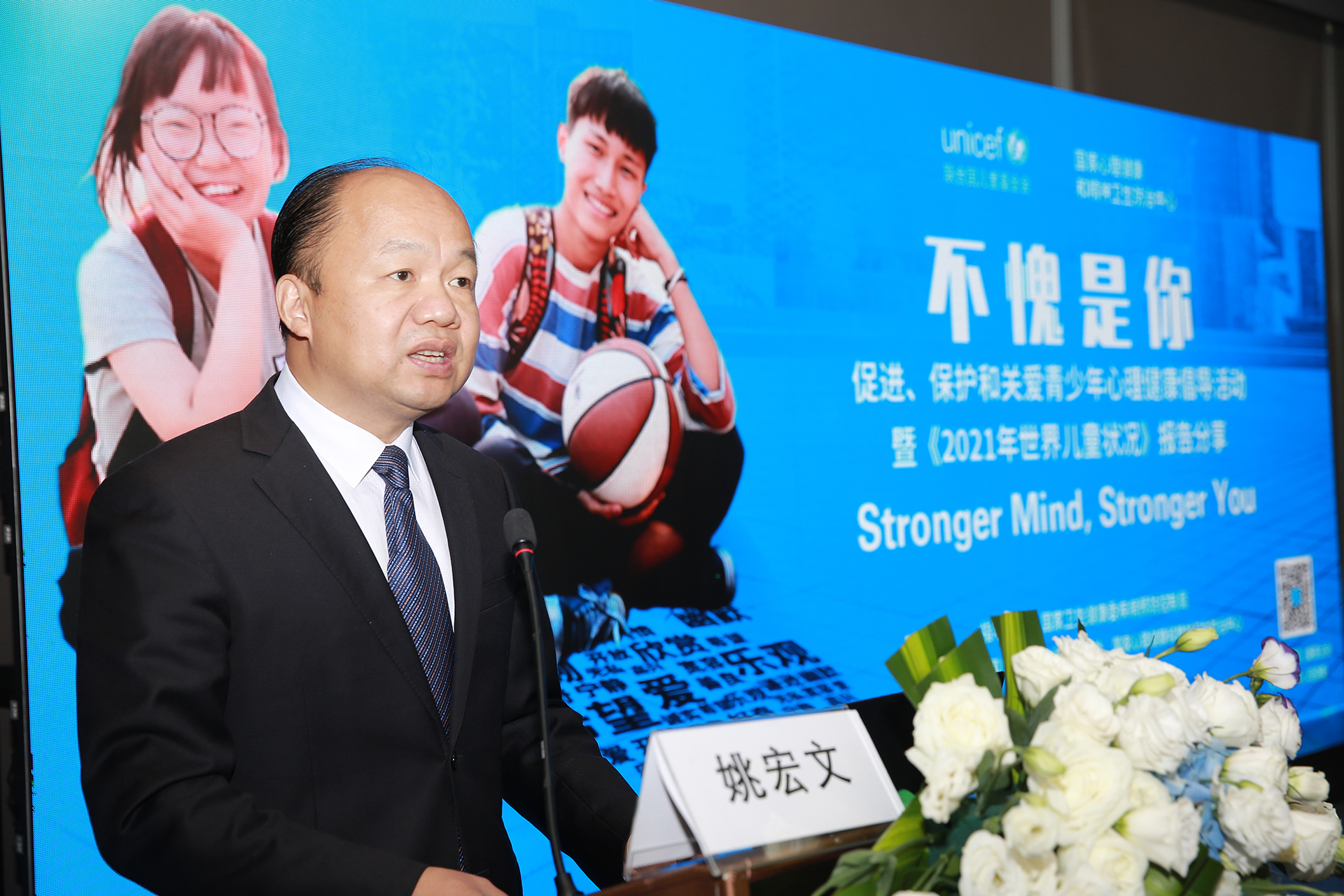 Prevention of mental health problems is more cost-effective and leads to better health and well-being outcomes than treatment alone.

In 2016, UNICEF joined forces with the National Health Commission to launch the ‘Adolescent Health and Development Project’ in 14 districts and counties of 11 provincial level regions. The project focuses on building adolescents’ awareness, knowledge and skills for better mental health and provides information on where and when they can access services. This project has reached over half a million adolescent girls and boys from more than 430 schools with comprehensive mental health services.

The #StrongerMindStrongerYou campaign is part of UNICEF’s work to empower adolescents and young people through peer support to develop skills to help each other and reject stigma. UNICEF is also working to:

State of the World’s Children 2021

UNICEF also released The State of the World’s Children 2021; On My Mind: promoting, protecting and caring for children’s mental health, the organisation’s most comprehensive look at the mental health of children, adolescents and caregivers in the 21st century.

According to the report, even before COVID-19, children and young people carried a burden of mental health conditions, and investment to address them has been insufficient. Diagnosed mental disorders, including ADHD, anxiety, autism, bipolar disorder, conduct disorder, depression, eating disorders, intellectual disability, and schizophrenia, can significantly harm children and young people’s health, education, life outcomes, and earning capacity.

While the impact on children’s lives is incalculable, a new analysis by the London School of Economics in the report indicates that globally the lost contribution to economies due to mental disorders that lead to disability or death among young people is estimated at nearly $390 billion a year.

The COVID-19 pandemic continues to heavily impact children and young people’s mental health and well-being. According to the latest data from UNICEF, globally, at least 1 in 7 children have been directly affected by lockdowns, while more than 1.6 billion children have suffered some loss of education. The disruption to routines, education, recreation, as well as worries about family income and health are leaving many young people feeling afraid, angry, and concerned for their future. For example, an online survey in China in early 2020, cited in The State of the World’s Children, indicated that around a third of respondents reported feeling scared or anxious.

The report notes that a mix of genetics, experience and environmental factors in the earliest days of life, including parenting, schooling, quality of relationships, exposure to violence or abuse, discrimination, poverty, humanitarian crises, and health emergencies such as COVID-19 all shape and affect children’s mental health throughout their lifetime.